Michael Farris is the co-founder of the Home School Legal Defense Association (HSLDA) and Chancellor of Patrick Henry College, a conservative Christian collage. He co-founded HSLDA in 1983 with attorney Michael Smith and served as President of the organization from its beginning until 2000, when Smith took the role. In 1996, he and his daughter Cristy, formed the National Christian Forensics and Communications Association, the first homeschool debate league. In 2000, Farris founded Patrick Hentry College and served as its first President until 2006.[1] 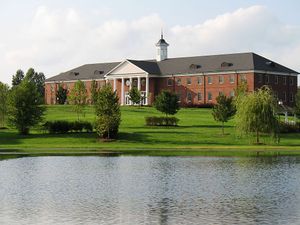 In 1993, Farris was the Republican nominee for Lieutenant Governor of Virginia and was defeated by Democrat Don Beyer 54-46 percent. In 2008, Farris served as an adviser to former Arkansas Governor, Mike Huckabee's presidential primary campaign.

He serves a constitutional lawyer, and author of ten non-fiction books and three novels. Farris is also an ordained minister, and pro-family activist in Washington, D.C. He and his wife, Vickie, have 10 children which they homeschooled.

Farris currently serves as Chairman of the Board and General Counsel for HSDLA. He is Chancellor Emeritus and teaches Constitutional Law and coaches the Moot Court team at Patrick Henry College.[1]

Farris earned an LL.M. with Merit in Public International Law from the University of London.

In recognition of his work in home education, Education Week has named Dr. Farris one of the “Top 100 Faces in Education of the 20th Century.” Heritage Foundation awarded him its Salvatori Award for American Citizenship in 2002.[1]

On October 21, 2008, Farris was invited to appear on the Colbert Report to presented Stephen Colbert with the honorary title of Arbiter of American Morality and Defender of the Vast Right-Wing Conspiracy.[2]