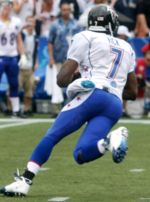 Michael Vick (born 1980) is a National Football League quarterback for the Philadelphia Eagles. He is widely regarded as one of the most athletic quarterbacks in the league, which makes up for his being relatively short for a professional player at his position at 6'0". Vick, whose jersey number is #7, was the first pick in the 2001 NFL Draft after starring at Virginia Tech.

In July 2007, Vick was indicted by a federal grand jury for his active involvement and financing of a dog fighting ring on his property.[1] Public opinion was outraged and he was immediately suspended from the team. The Atlanta team owner indicated he would never wear a Falcon uniform again. Vick pled guilty in August,[2] and was sentenced to 23 months in federal prison.[3] He was released in May 2009 to serve the remainder of his time in home confinement and work a construction job.[4]

In September 2010, Vick was named the starting quarterback for the Philadelphia Eagles.[5]

Now out of football, Vick has purportedly repented of his past conduct, enough that he works with the liberal Humane Society of the United States to speak of his past actions and why they were wrong. In 2018 Vick was (controversially) invited as a Convocation guest speaker at Liberty University.[6]