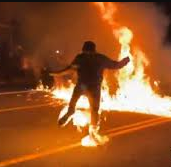 Many Antifa "peaceful protesters" who felt ready to tear up the Constitution and burn the system down forgot the childhood adage, "you play with fire and you get burned."

A Molotov cocktail is a hand-held incendiary device. One makes it by pouring gasoline into a narrow-necked bottle and stuffing that bottle with a cloth wick that dips into the gasoline. To use it, the user lights the wick and throws the bottle.

British Commonwealth speakers usually refer to these as "petrol bombs," using the British name for gasoline.

The name "Molotov cocktail" was coined by the Finns during World War II,[1] called Molotovin koktaili in Finnish. The name was a pejorative reference to Soviet foreign minister Vyacheslav Molotov, who was one of the architects of the Molotov–Ribbentrop Pact signed in late August 1939.

The name's origin came from the propaganda Molotov produced, mainly his declaration on Soviet state radio that bombing missions over Finland were actually humanitarian relief efforts.[2] The Finns sarcastically dubbed the Soviet cluster bombs "Molotov bread baskets".[3] When the hand-held bottle firebomb was developed to attack Soviet tanks, the Finns called it the "Molotov cocktail", as "a drink to go with his food parcels".[4]