The Mongols are an ethnic group that originated in modern-day Mongolia, Russia, and China. They successfully invaded and controlled much of Asia, including all of China, parts of Russia, and most of the Middle East during the Middle Ages. At the height of their empire they controlled 22% of the Earth's total land area around 12,741,000 square miles. Given their size they were the world's second largest empire ever to exist right behind the British Empire and the world's largest Contiguous empire ever 6 times the size of the empire of Alexander the Great.

Today the Mongols dominate the large country of Mongolia, as well as some neighboring areas in China. 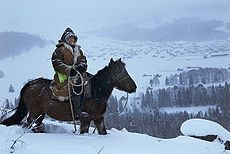