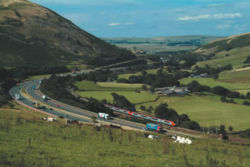 A motorway is the British term for a high speed divided highway with limited access points on which only certain forms of motor traffic are permitted, analogous to a US freeway, a German Autobahn, French autoroute, etc.[1] As of 31 March 2004, the Motorway network in England totalled 4,818 miles (7,754 km); this figure does not include Wales, Scotland or Northern Ireland.[2]

The first motorway in Great Britain was the M6 Preston by-pass, opened on 5 December 1958. However, the first substantial length of motorway to open was the M1 from London to Northamptonshire, on 2 November 1959.