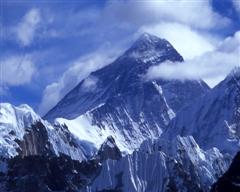 It is part of the Himalayan mountain range and is located on the border between Nepal and Tibet.

Mount Everest became an issue of controversy in 2019 when 11 climbers died near the summit amid a traffic jam of mostly amateur climbers, which caused prolonged waiting periods for many climbers in scarce oxygen at the high altitude.

English explorers George Mallory and Andrew Irvine disappeared in 1924 while attempting to summit the mountain. Mallory's body was discovered below Everest's peak in 1999. Irvine's body has never been recovered. It is unclear whether or not they were successful in climbing to the top of the mountain before they died.

Sir Edmund Hillary and Tenzing Norgay are credited with the first successful ascent on May 29, 1953.

James Whittaker was the first American to reach the summit, on May 1, 1963.

Another notable climber is Reinhold Messner, who made the first solo ascent on Aug. 20,1980, after a prior successful summit two years earlier with his partner Peter Habeler, made without supplemental oxygen.

The first female to climb Everest was a Japanese climber named Junko Tabei. She summited on May 16, 1975.

Climbers are required to have valid permits issued by the Nepalese or Tibet government to make an attempt at the mountain.

Many climbers these days are part of commercial expeditions, although some climbers choose to climb alone. Most commercial expeditions employ local residents to assist in the climb, often Sherpas, who live in the Khumbu, the national park surrounding Everest, and are adapted to the high altitude. Sherpas with experience climbing the mountain can offer valuable assistance in many tasks, carrying gear and equipment, setting up camps, laying out routes, fixing ropes for the climb, and acting as guides and assisting climbers.

The climb itself is difficult and a successful attempt requires careful planning. Climbers must take into consideration the weather conditions, and few climb without supplemental oxygen.

Typically, the expedition takes several weeks or longer. A base camp is usually established near the bottom of the mountain, then 3 to 4 camps are set up at higher levels. At each camp, climbers spend several days in "acclimatization" to get used to the higher altitude. Climbing at high altitudes can be dangerous and without proper acclimatization can cause serious, life-threatening medical conditions. These include High Altitude Pulmonary Edema (HAPE) and High Altitude Cerebral Edema (HACE), which are caused by fluid collecting in the lungs and brain.

Other medical problems that can occur while high-altitude climbing include frostbite, snow blindness and hypothermia.

Many times, weather is the deciding factor in whether the climbers will attempt to summit the mountain (reach the top).

The top of Everest is always covered in snow, and a strong wind constantly blows.

Most summit attempts are made from late March through May before the summer monsoon season begins.[3]