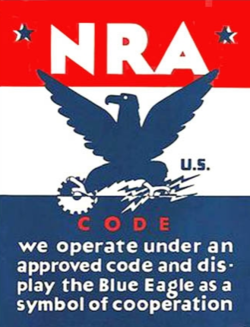 The National Recovery Administration, or NRA, was a major New Deal agency that lasted 1933-35, designed to speed recovery from the Great Depression. Headed by General Hugh Johnson, the NRA was created by the National Industrial Recovery Act, along with the PWA.

The NRA was designed with the objective to restore the economic health of American business, modeled on the progressive ideals of the World War I-era War Industries Board.[2] Johnson, who served as the head of the NRA, also served in the WIB during World War I.[3]

It had four objectives: to spread work evenly among people; to distribute wages, thereby increasing purchasing power; To stop unfair trade practices and limit cutthroat competition; and to eliminate child labor. The NRA was in operation about two years. The business community was initially highly supportive, but by 1934 became increasingly frustrated with the red tape involved. The NRA was shut down in 1935, and no efforts were made to revive it. Economic historians generally agree that it was a poor solution to the economic crises.

The National Recovery Administration (NRA) was a key part of the First New Deal in 1933-35, until it was abolished by the Supreme Court. The goal was to eliminate cut-throat competition by bringing industry, labor and government together to create codes of fair practices and set prices. The NRA was created (by the National Industrial Recovery Act) under the general guidance of President Franklin D. Roosevelt and his top advisors. It allowed industries to create "codes of fair competition," which were intended to reduce destructive competition and to help workers by setting minimum wages and maximum weekly hours. Most economic historians consider the NRA to be a resounding failure with very little positive economic success.

The NRA, symbolized by the blue eagle was popular with workers. Businesses that supported the NRA put the symbol in their shop windows and on their packages. Though membership to the NRA was voluntary, businesses that did not display the eagle were urged to be boycotted - making it seem mandatory for survival.

Its director was Hugh S. Johnson, a retired general and successful businessman. Johnson saw the NRA as a national crusade designed to restore employment and regenerate industry. Johnson was removed in 1934.

The NRA quickly created a series of fair competition codes, by bringing together leaders from each industry who in turn set the codes for that industry. The NRA spent the first months of its life trying to get both support from government and from the people for these codes. After an initial wave of public support, NRA bogged down. About 23,000,000 people worked under the NRA fair code. However, violations of codes became common and attempts were made to use the courts to enforce the NRA. The NRA included a multitude of regulations imposing the pricing and production standards for all sorts of goods and services.

There was something almost awesome, and perhaps typically American, in automaker Henry Ford's defiance of the NRA. Ford insisted his giant company was adhering to the law and had, in fact, anticipated many of the code provisions regarding minimum wages, maximum hours, and working conditions. Critics focused their attack upon the company's labor practices, which clearly foreshadowed a coming strife (the autoworkers union did not yet exist), but no case was brought to court and Ford's fiercely individualistic attitude was never successfully challenged by the New Dealers, who opposed individualism. The larger issue was not whether Ford did or did not comply, but rather what, in this period of profound social change, was to be the "fundamental American idea."[4]

In early 1935 the new chairman announced that the NRA would stop setting prices, but businessmen complained. Chairman Samuel Williams told them plainly that, unless they could prove it would damage business, NRA was going to put an end to price control. Williams said, "Greater productivity and employment would result if greater price flexibility were attained." Of the 2,000 businessmen on hand probably 90% opposed Mr. Williams' aim, reported Time magazine. "To them a guaranteed price for their products looks like a royal road to profits. A fixed price above cost has proved a lifesaver to more than one inefficient producer." The business position was summarized by George A. Sloan, head of the Cotton Textile Code Authority:

"Maximum hours and minimum wage provisions, useful and necessary as they are in themselves, do not prevent price demoralization. While putting the units of an industry on a fair competitive level in so far as labor costs are concerned, they do not prevent destructive price cutting in the sale of commodities produced, any more than a fixed price of material or other element of cost would prevent it. Destructive competition at the expense of employes is lessened, but it is left in full swing against the employer himself and the economic soundness of his enterprise....But if the partnership of industry with Government which was invoked by the President were terminated (as we believe it will not be), then the spirit of cooperation, which is one of the best fruits of the NRA equipment, could not survive.[5]

Pennock (1997) shows that the rubber tire industry faced debilitating challenges, mostly brought about by changes in the industry's retail structure and exacerbated by the Depression. Segments of the industry attempted to use the NRA codes to solve these new problems and stabilize the tire market, but the tire manufacturing and tire retailing codes were patent failures. Instead of leading to cartelization and higher prices, which is what most scholars assume the NRA codes did, the tire industry codes led to even more fragmentation and price cutting.

Alexander (1997) examines the macaroni industry and concludes that cost heterogeneity was a major source of the "compliance crisis" affecting a number of NRA "codes of fair competition" that were negotiated by industries and submitted for government approval under the National Industry Recovery Act of 1933. The argument boils down to assumptions that progressives at the NRA allowed majority coalitions of small, high-cost firms to impose codes in heterogeneous industries, and that these codes were designed by the high-cost firms under an ultimately erroneous belief that they would be enforced by the NRA.

Storrs (2000) says the National Consumers' League (NCL) had been instrumental in the passage and legal defense of labor legislation in many states since 1899. Women activists used the New Deal opportunity to gain a national forum. General Secretary Lucy Randolph Mason and her league relentlessly lobbied the NRA to make its regulatory codes just and fair for all workers and to eliminate explicit and de facto discrimination in pay, working conditions, and opportunities for reasons of sex, race, or union status. Even after the demise of the NRA, the league continued campaigning for collective bargaining rights and fair labor standards at both federal and state levels.

The NRA came under attack from some businessmen, while others supported it. (Best 1991). Sniegoski (1990) shows that a major attack came from the left. The "National Recovery Review Board," headed by famed lawyer Clarence Darrow, was created by President Roosevelt in March 1934 and abolished by him that same June. During its brief existence, the board issued three reports highly critical of the NRA. The reports, which charged the NRA with fostering monopolies, were philosophically consistent in their advocacy of competitive capitalism and their denunciation of special privilege for big business. Although the NRA was attacked from other quarters at the same time, the small-business viewpoint of the Darrow board, supported by followers of Louis Brandeis in the New Deal, was a major factor in the NRA's demise.

On May 27, 1935, in Schechter Poultry Corp. v. United States, the Supreme Court handed down a decision that invalidated these codes, which were the foundation of the NRA itself. These codes were invalidated because they authorized the NRA to make laws, a function reserved for Congress.[6] The NRA was forced to reduce its staff so it could carry out the few functions left to it after the Schechter decision efficiently.

Some of the labor provisions reappeared in the Wagner Act of 1935 and the minimum wage act of 1937.[7]

A senate resolution on June 14, 1935 extended title I of the Recovery Act until April 1 of that year. The NRA was reorganized to permanently fit its new, diminished role. On January 1, 1936, the National Recovery Administration was formally terminated to be liquidated by April 1, 1936.