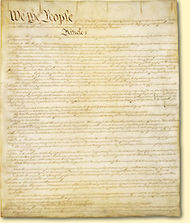 Article VI, Section 3, also known as the No Religious Test Clause of the Constitution, is a small line of the text which stipulates that for applicants seeking to serve in the federal government, there can be no religious test barring their entry to office upon election or appointment.

The text reads: "but no religious test shall ever be required as a qualification to any office or public trust under the United States."

This however does not mean that religious tests cannot be applied elsewhere as a force of law. Immigration laws, for example, commonly employ religious tests.

the applicant must establish that race, religion, nationality, membership in a particular social group, or political opinion was or will be at least one central reason for persecuting the applicant.[1]

Additionally, Section 1101(a)(42)(A) of Title 8, U.S. Code specifically states what a "refugee" is and again, religion (a religious test) is stipulated in federal law.[2]