The Odyssey is an epic poem written by Homer, a Greek poet, in the 8th century B.C. It recounts events that took place after the Trojan War, part of which is described in Homer's other major work the Iliad. The main themes of the poem are Odysseus's journey home from Troy after winning the war, and his trials along the way. During his journey he encounters many mythical beasts, including a cyclops, which he blinds. Unbeknownst to Odysseus, the cyclops is the son of the great sea god Poseidon who attempts to prevent Odysseus from ever reaching his home of Ithaca. He eventually reaches home with the help of other gods, especially Athena, and he reunites with his wife after dispatching her lecherous suitors.

The story is surprisingly "modern" in feel. It commences after most of the action has taken place and is told in "flashback".

The Roman writer Virgil paid tribute to this epic with the creation of his masterpiece the Aeneid (books I to XII), best known for its elegant use of hypermetric elision, multiple correspondence similes and litotes.

Inspirations of Modern Works of Art 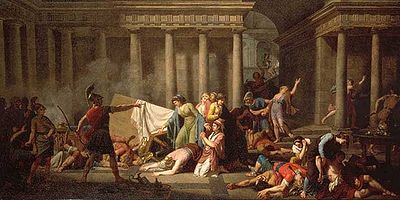 Odysseus, under his Latin name Ulysses, has at various times inspired other works of art, including a poem by Alfred Lord Tennyson [1] (made famous for its ending line, in perfect iambic pentameter - "To strive, to seek, to find, and not to yield"), and the novel Ulysses by James Joyce (perceived initially as literary pornography). More recently, it provided the inspiration for the Coen Brothers film O Brother, Where Art Thou?.