From Conservapedia
Jump to: navigation, search
Granville Oral Roberts,(January 24, 1918—December 15, 2009) was an American preacher. Roberts was an independent Pentecostal leader who was best known for his many revivals, his faith healing abilities and for his use of radio and television as a means by which to spread the Word. In 1963 he founded Oral Roberts University, in Tulsa, Oklahoma. 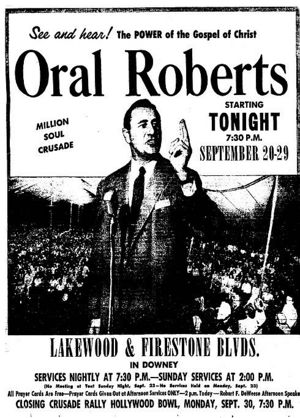 Oral Roberts was born in Pontotoc County, Oklahoma. He studied Bible in Oklahoma, and married a preacher's daughter. Oral and Evelyn were married 66 years before her death. Over the years, Oral's ministry expanded from tents, to the radio, to television where his program is enjoyed by Christians across the globe. He has also written over 100 books.

In 1947, Roberts founded the Oral Roberts Evangelistic Association. Obeying a command from God, he founded Oral Roberts University in Tulsa, Oklahoma in 1963. ORU's first students entered the school in 1965.

Roberts became a pioneer in the use of radio and television. In the 1960s and 1970s, he left the faith-healing circuit to build Oral Roberts University, founded in 1963 in Tulsa, Oklahoma. He claims to have raised over a billion dollars.[1]

In 1977, Roberts announced he would begin construction of the City of Faith Medical and Research Center, after claiming that a 900-foot-tall Jesus instructed him to build the hospital.[2] The center opened in 1981. During the eight years it remained open, City of Faith was one of the largest health facilities of its kind in the world, and was an innovator in merging prayer and medicine in the healing process.

On January 4, 1987, Roberts appealed on the television program "Expect a Miracle" and revealed that unless he raised $8 million during the fund raising drive for the City of Faith, God would "call him home." He stated this money was to be used to train Christian doctors as 'medical missionaries.' As a result, Roberts raised $9.1 million; $1.3 million of this was given by a single donor, a dog racing track owner. Unfortunately, the fundraiser did not permanently save the City of Faith: In November 1987, Roberts announced the closure of the City of Faith. The City's buildings have since been converted into predominantly office space and renamed the CityPlex Towers.