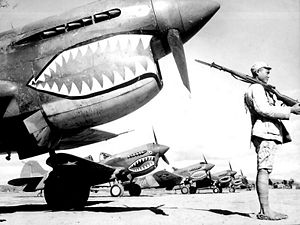 The Flying Tigers in China.

The P-40 Warhawk is a World War II-era fighter plane manufactured by Curtiss. This airplane was made famous from its use by the Flying Tigers in the Pacific theater during World War II, although it was used to some extent in all theaters. This single-pilot aircraft was powered by a single V-12 engine (an Allison V-12 engine on all models except for the P-40L, which used the Merlin V-12). The plane’s armaments consisted of varying ranges of 50 caliber guns, also dependent on model. A total of 13,737 P-40s were built.[1]