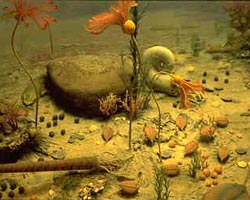 The Paleozoic or Palaeozoic era is the earliest of three geologic eras of the Phanerozoic eon in the Geologic system of classifying rocks.

The Paleozoic era is divided into six different periods:

The Paleozoic was originally known as the Primary, but was renamed the Paleozoic, meaning ancient life, according to the evolutionary view. Under the uniformitarian dates assigned by secular geologists, it represents approximately the period of Earth's history from 540 million years ago to 250 million years ago.[1]

Flood geologists reject the uniformitarian assumptions behind the dates derived by secular geologists, so they reject these dates (see geologic system). Instead, they would consider the Paleozoic sediment to be early Flood deposits.[2]

The Paleozoic is bracketed by two of the most important events in the history of animal life. At its beginning, multicelled animals underwent a dramatic "explosion" in diversity, and almost all living animal phyla appeared within a few millions of years. At the other end of the Paleozoic, the largest mass extinction in history wiped out approximately 90% of all marine animal species.[3]