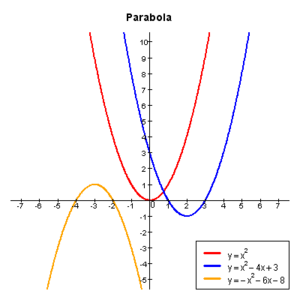 A parabola is a curve on a plane, consisting of all the points that are equidistant from a point called the focus and a line, called the directrix.

It is a conic section, the intersection of a plane and a cone where the plane is parallel one side of the cone.

The general algebraic formula for a parabola is:

A parabola is the path taken by an object in motion subject to a uniform acceleration, such as gravity, ignoring friction.

It is also the path taken by an object in orbit around a star or planet, when it travels precisely at escape velocity; compare ellipse and hyperbola.