The MIM-104 Patriot missile is a surface-to-air missile which is used against aircraft and missiles at all altitudes. It was designed by the Raytheon Corporation as an anti-aircraft missile, but its primary role today is ballistic missile defense.

PATRIOT is the acronym for Phased Array Tracking Radar to Intercept Of Target. (A more far-fetched abbreviation is Protection Against Threats, Real, Imagined, Or Theorized.)

The missile has been sold to over 15 countries, including Taiwan, Israel, Kuwait, Germany, Poland, the Netherlands, Saudi Arabia, and Japan.

In 1976, the Armys SAM-D (Surface-to-Air Missile, Development) program was renamed the PATRIOT program. The tests at the White Sands Missile Range were successful, and the Patriot was deployed in 1984. Although it served for a while as an anti-aircraft system, it was upgraded in 1984 and changed to an anti-ballistic missile weapon. 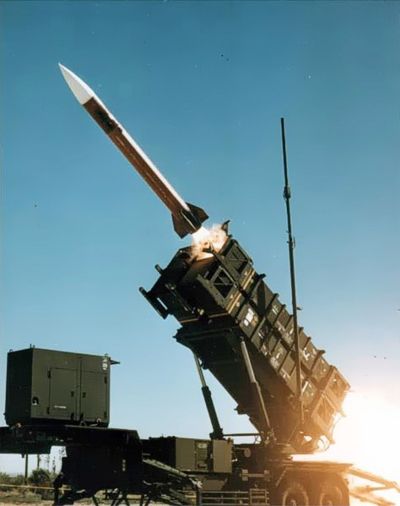 A Patriot missile is fired.