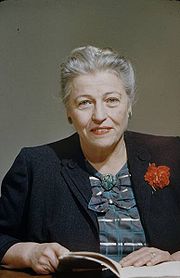 Pearl S. Buck (born Pearl Sydenstricker, June 26, 1892 - March 6, 1973) was a novelist and teacher who spent much of her life in China; she learned Chinese before English but became the third American to win the Nobel Prize (1938) in literature for her English novels.[1] Her novel The Good Earth (1931), about the travails and triumphs of Chinese peasants, won the Pulitzer Prize and became a worldwide best-seller and the basis of a popular film. Her writing is simple and vivid, full of telling details and minute observations that bring her subjects to life. She published ninety books, many of them best-sellers, fifteen of them Book-of-the-Month Club selections. She wrote novels, short stories, plays, translations (from the Chinese), biography, autobiography, children's literature, essays, and poetry. Her work was translated into 145 different languages and dialects. She was a strong opponent of abortion who wrote the essay “Every Life is a Gift,” as the forward to Robert E. Cooke’s book Terrible Choice: The Abortion Dilemma (1968).

"single-handedly changed the distorted image of the Chinese people in the American mind through literature. Chinese people were no longer seen as cheap, dirty, ridiculous coolies or sneaky, vicious, insidious devils. The majority of Chinese were seen for the first time in literature as honest, kindhearted, frugal-living, hard-working, gods-fearing peasants who are much the same as American farmers." In 1992, historian James C. Thomson Jr. called Buck "the most influential Westerner to write about China since 13th-century Marco Polo."

""I grew up in a double world," Buck recalled in her 1954 memoir, Several Worlds. "The small white clean Presbyterian American world of my parents and the big loving merry not-too-clean Chinese world.... When I was in the Chinese word I was Chinese, I spoke Chinese and behaved as a Chinese and ate as the Chinese did, and I shared their thoughts and feelings."

She taught English at Nanjing University from 1920 to 1933. She mingled with China's top intellectuals; the renowned romantic poet Xu Zhimo was a close friend, and some suspect the two were lovers.

In 1933 Buck published All Men Are Brothers, her two-volume, thousand-page translation of the classic Chinese novel Shui Hu Chuan; it was the first complete translation into English.

Although she was not herself an official missionary she served on the Presbyterian Board of Foreign Missions until forced out by the actions of John Gresham Machen.[3] She wrote many stories that illustrate the lives, efforts, failures and achievements of some missionaries. Several of her books, especially The Exile, Fighting Angel, Pavilion of Women, Kinfolk, and Peony helped Western readers reconsider Christian missions and understand why they never reached more than 1% of the Chinese people.

In 1936 she divorced her missionary husband of 17 years, John Lossing Buck, and married her publisher, Richard Walsh on the same day.

She was active in the civil rights movement and numerous liberal causes, and pushed successfully for the repeal of laws designed to exclude Chinese immigration to the U.S. She was especially active in helping children who were mentally or physically disabled, or were disadvantaged because of their race.[4] She worked tirelessly during World War II to promote Chinese-American understanding and friendship. She was not hostile toward the Communists and by the 1950s she actively opposed American involvement in the Cold War. The Communists, however, ridiculed and attacked her for what they called her "attitude of distortion, smear, and vilification towards the people of New China and its leaders."[5]

Prior to the Second Sino-Japanese War, Buck worked with Margaret Sanger to open a birth control clinic in Shanghai.[6]

Pearl Buck left her fortune to the Pearl S. Buck Foundation, which she founded in 1963 at the age of 73, to help mixed-raced descendants of Chinese and Americans (then called "Amerasians"). The foundation has helped liberalize adoption laws.