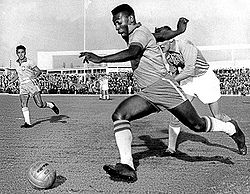 Pelé (1940-2022) (born Edson Arantes do Nascimento[1]) was a Brazilian soccer player who spent time late in his career in the U.S. with the New York Cosmos of the North American Soccer League. Most, including FIFA, consider him the greatest soccer player ever. His career "record of 1,281 goals in 1,363 games is still unsurpassed."[2]

Pelé led Brazil to World Cup championships in 1958, 1962 and 1970 - three out of the four tournaments when Pele was in his prime. In the 1958 tournament, Pelé (at the age of 17) scored six goals in the final three games, including a goal in the finals that is considered one of the greatest ever.[3] In the 1970 tournament, Pelé led what is considered, to have been the finest soccer team ever. One list of his 10 greatest goals includes a bicycle-kick goal by Pele.[4]

Upon winning the 1970 World Cup final, Pelé did not rejoice with his teammates immediately. Instead, Pelé went off alone to give thanks to God. He explained that his team prayed together before winning the finals also, "But never that we might win. We prayed for the poor, the crippled, the sick, the innocent in wars and for the health of loved ones."[5]

Pelé also played on the Brazilian World Cup team in 1966, but was injured due to the disgraceful violence of opposing team members from the Bulgarian and Portuguese national teams.[6]

For the most of his career, he played in Santos Futebol Clube, a soccer team of Santos, in the state of São Paulo. He joined the New York Cosmos in 1975 and played for them until his retirement from soccer following a sold-out exhibition game between the Cosmos and his old club Santos at Giants Stadium in East Rutherford, New Jersey on October 1, 1977.

God fearing Pele was careful to mention, thanking God.[7] However, during his life he had multiple sexual liaisons, both inside and outside of marriage, resulting in more than one child born out of wedlock (though he did recognize all of his children as his and supported them). Pelé with a T-Shirt sent to Jair Bolsonaro.

Apparently close to the end of his life on December 23, 2022, one of his daughters posted a picture and message on Instagram, "fighting and with faith," from his bedside.[2]