The Pennsylvania Railroad, chartered in 1846, was one of the most important lines in the Railroad history of the United States. For many years was the largest corporation in the world, with a peak of 10,000 miles of tracks in heavily industrialized parts of the east, and 250,000 employees. 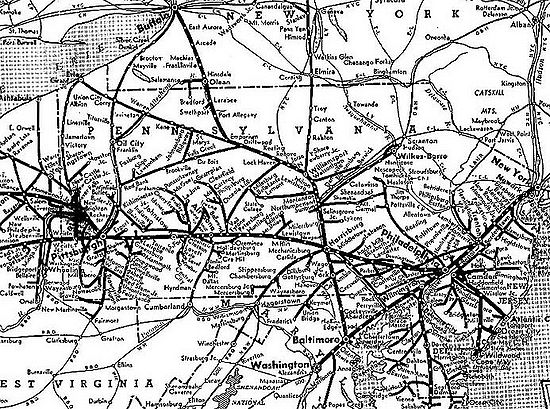 eastern parts of the Pennsylvania system, 1930

Herman Haupt played the leading role in the early development and growth of the Pennsylvania Railroad, 1847-56. His work on original surveys, track-laying, and bridge building operations led to his promotion to chief engineer. He fought for reduced freight tonnage taxation (to allow for competition with canal traffic) and he influenced the extension of track throughout the Midwest.

In 1860, the Pennsylvania represented only the main line from Philadelphia to Pittsburgh, with a few short branches. By 1869 it had expanded within Pennsylvania alone to nearly one thousand miles and also controlled lines northward to the shores of Lake Erie, through New York. In 1869 it purchased the Pittsburgh, Fort Wayne and Chicago line, giving it a connection with Chicago through Ohio and Indiana. In 1870 the Pennsylvania began to expand on the east also and obtained an entry into New York City by acquiring the United Railroad and Canal Company, which owned lines across New Jersey.

In 1871-72 the Pennsylvania expanded into the Midwest by astute purchases. It bought the Cleveland and Pittsburgh Railroad in 1871 as well as smaller lines in Ohio, merging them into the system. The most important acquisition during this period was the purchase of the Pittsburgh, Cincinnati, Chicago and St. Louis, with lines extending westward from Pittsburgh to St. Louis, with branches reaching southward to Cincinnati and northward to Chicago. This system included over 1400 miles of road, giving the Pennsylvania a second line to Chicago, a direct line to St. Louis, a second line to Cincinnati, and access to territory not previously tapped.

Besides expanding the system and putting it on a solid financial basis, Thomson made the Pennsylvania the technological leader of the industry. It took the lead in moving from wood to coal, and from iron to steel (in rails, bridges and cars). With Philadelphia emerging as the center of the locomotive industry, new innovations were offered first to the Pennsylvania, which embraced them.

Thomson invented a new kind of management suitable for a large dispersed corporation with many functions. Specially, he devised a decentralized system based on geographical districts, as well as the "line and staff" system that became synonymous with American management. Line executives handled people and hourly decisions on traffic, while staff executives handled finance and paperwork.

George Roberts was president from 1880 to 1897 and embraced a decade of comparative prosperity for the country as a whole and after 1893 a very difficult period of panic and industrial and financial depression. In the 1880s the business of the Pennsylvania grew thanks to the steady industrial development of its region. Pittsburgh became the world center of steel and iron manufacture. The discovery of petroleum in western Pennsylvania, creating an enormous new industry in itself, proved to be a bonanza for the Pennsylvania. The extensive opening up of the bituminous (soft coal) districts of western Pennsylvania, Ohio, and Indiana, created a huge new category of traffic.

Expansion came with control of a line to Washington, and a Southern artery from Wilmington, Delaware, to Baltimore and Washington. It acquired control of the Richmond, Fredericksburg and Potomac Railroad and thus a line to Richmond, Virginia.

In addition to the development of its main line from Philadelphia to Jersey City, the Pennsylvania acquired many other New Jersey lines, including the West Jersey and Seashore, a road running from Camden to Atlantic City and Cape May.

The presidency of Alexander Cassatt, 1899-1906, saw the Pennsylvania reach its historic peak. Cassatt did not expand the mileage but deepened it, with quadruple tracks in the areas of heaviest traffic. Cassatt brought the line to New York City, purchased the Long Island Railroad, and started a tunnel that opened into the magnificent Pennsylvania Station in 1910.

It built Pennsylvania Station, one of the great urban stations in 1910; it was demolished in 1963. Construction involved major tunneling, a great bridge across the East River, and development of an electric train system. While the station building was demolished in 1963, the transportation complex of which it was a part remains, and Amtrak restored a nearby building for its new Penn Station.

The management of the Pennsylvania Railroad took the lead in fighting the 1922 strike of the national union of railroad shopmen who maintained railroads' rolling stock. Penn management assumed leadership of the industry in dealing with the strike, which began on 1 July 1922, by dispatching crews of their own loyal shopmen to help other railroads keep their equipment rolling and by leading a campaign among railroad executives to head off some lines from negotiating with the union. Penn management also resisted the Harding administration's attempt to conciliate between the shopmen and the railroads. By September 1922 the strike was effectively broken, but it was not until 1928 that the union canceled the strike order. Penn management was successful, but at a considerable financial cost.[1]

By 1938, the Pennsylvania Railroad had electrified 600 route-miles of track. Almost all of this electrification was accomplished after 1928 at a cost in excess of $250,000,000. Financial factors, including the artificially lower cost of operating diesel engines, prevented further electrification.

After years of fighting the growing trend toward diesel locomotives, and the increasing success of the General Motors (GM) Electro-Motive Division, the Pennsylvania Railroad purchased 820 GM diesel locomotives in 1949, bringing an end to an era for the nation's number one coal carrier.

The railroad brought in famous designer Raymond Loewy, who streamlined the GG-1, S-1, and K4S locomotives and upscaled the interior decoration of its rolling stock and stations.

By 1950 the Pennsy was America's largest transportation enterprise, with $3 billion in assets, and 10,100 miles of track stretching from Philadelphia to St. Louis. Only three industrials were larger (General Motors, Standard Oil of New Jersey, and U.S. Steel). The New York Central system had assets of $2.6 billion in a system based just north of the Pennsylvania lines, with considerable overlap.

In 1968 the Pennsy merged with the rival New York Central into the Penn Central Transportation Company, which went bankrupt in 1970. The railroad continued to operate and today its historic track is largely operated by the Norfolk Southern Railway.