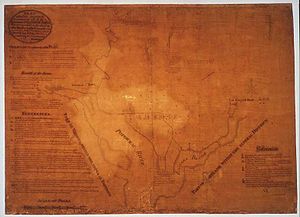 Pierre Charles L'Enfant (1754-1825) was a French-born American architect and engineer. In 1791, George Washington appointed L’Enfant to design the new capital of the United States, (Federal City).

L'Enfant claimed, "a plan wholly new," designed from its inception to serve as the framework for the capital city of the new nation beginning in the year 1800. Its scheme of broad radiating avenues connecting significant focal points, its open spaces, and its grid pattern of streets oriented north, south, east, and west is still the plan against which all modern land use proposals for the Nation's Capital are considered. [1]

L'Enfant's remains rest at the National Cemetery at Arlington.