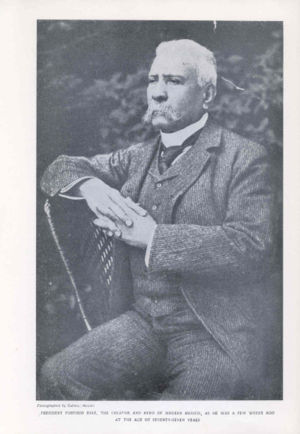 In 1850 Porfirio entered the Instituto de Ciencias y Artes (Oaxaca) to study Law. General Porfirio Diaz participated in the Battle of Puebla that took place the 5th of May of 1862 (French Intervention). In 1870, he ran as presidential candidate against President Benito Juarez. On January 10, 1876, after Juárez's death, he launched the Plan de Tuxtepec against President Sebastián Lerdo de Tejada. On November 29, 1876 he appointed himself President. Diaz maintained power through three decades. He embarked on a program of modernization, attempting to bring Mexico up to the level of a modern state. He kept the social peace, encouraged foreign investment and had friendly relationships with the U. S. and Europe.

Díaz also stayed in power because he successfully encouraged economic development. He created a solid banking system and an effective tax collection system. State tariffs, taxes on production, and the sales tax were abolished. He paid off Mexico's creditors and, in 1894, balanced the national budget for the first time in Mexican history. Mexico was the world's largest silver producer but he put the nation on the international gold standard. The Mexican peso became one of the world's soundest currencies. He revised laws to make the country attractive to investors. [1]

Porfirio Diaz, as president Benito Juarez, was a Mason, but he did not gain control of the Masonic lodges of his country. He failed trying to build the Grand Diet.

In a 1908 interview with James Creelman, Diaz stated that Mexico was ready for democracy.

Francisco I. Madero and Mexican Revolution forced him from office and fled the country for France in 1911. He died in exile in Paris; he was buried there in the Cimetière du Montparnasse. His rests wait for the day to return to his beloved country.

His parting to exile words were that "Madero has unleashed the tiger; let's see if he can tame it."