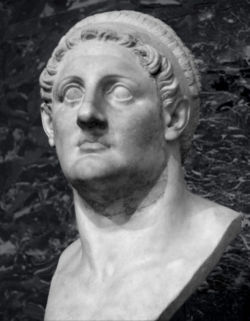 Ptolemy I Soter (son of Lagus) was a general of Alexander the Great. He established the Ptolemaic Dynasty in Egypt and adopted the local customs and religion.

Following Alexander's death in 323 BC, He brought his body with him to be buried in Alexandria, reuniting the famed conqueror with the city that bore his name. For the next two-and-a-half centuries, the Ptolemaic dynasty of the Greeks would successfully rule Egypt, mingling Hellenic traditions with the mighty legacy of the Pharaohs. The Ptolemaic Dynasty