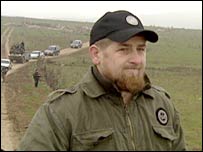 Ramzan Kadyrov (Russian: Рамзан Кадыров) is the President of the Russian republic of Chechnya. He is the son of former Chechen President Akhmad Kadyrov and puppet dictator. Ramzan Kadyrov is a brutal Putin-backed, pro-Kremlin warlord.[1] He is widely viewed as nothing more than Putin's puppet. The private army under his control has been accused of numerous human rights abuses, including torture, extortion, kidnapping, rape and murder.[2] The plurality of Russian people distrust Kadyrov.[3] He and his father fought on separatist side and then defected to Russian side.

However, Kadyrov did help marginalize the influence of radical Islam, which began to take hold in the region amidst the devastation of the first Chechen war (1994-1996).[4]

Ramzan Kadyrov and his father Akhmad were awarded by 'Hero of Russia' star, though they took part in terrorist groups in 1990ths.[5] Now Ramzan Kadyrov is de facto authoritarian ruler in Chechnya with little involvement of Russian government, in gratitude Ramzan provides 100% support of Putin and his party in elections.

Kadyrov has de facto established Sharia law in the region and was condemned by the international community for slaughtering gay citizens.[6] Chechen authorities have imposed a compulsory Islamic dresscode for women.[7]