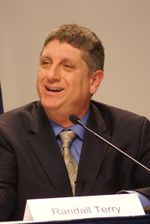 Randall Terry (born 1959, in New York, New York) is a conservative, Catholic (since 2005) pro-life activist. He is best known for founding the pro-life Operation Rescue in 1987. In 2003, he also founded the Society for Truth and Justice. He is very politically active in a variety of issues, usually in relation to the preservation of human life. He usually fights the practice of abortion, but also resists practices such as euthanasia. For example, he was vocal during the Terri Schiavo case, arguing to allow her to live. He also stands against sodomy/homosexual "marriage", and is grieved that his son does not uphold the same moral beliefs.[1][2] He is also one of the few Democrats who is sincerely pro-life rather than pretending to be so.

As a part of Randall Terry's outreach efforts, he has produced several movies. These include: