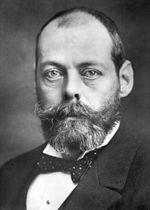 Lord Randolph Henry Spencer Churchill (1849 - 1895) was the third son of the seventh Duke of Marlborough and the father of Winston Churchill. He had a brilliant but brief career in British Parliamentary politics in the 1880s. An aggressive and effective debater, he attempted through his program of "Tory Democracy" to garner popular support for his Conservative Party. He became Chancellor of the Exchequer in 1886, at the age of thirty-seven, but soon resigned in an attempt to enforce his views on the Cabinet (believing himself irreplaceable). Contrary to his belief that no other potential Chancellor existed, George Goeschen was appointed to replace him, leading Churchill to remark bitterly "I forgot Goeschen". He died on 24 January 1895, seventy years to the day before the death of his son Winston.[1]