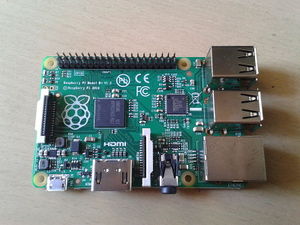 A Raspberry Pi printed circuit card
Raspberry Pi is an educational single-board computer designed for students and hobbiests. Raspberry Pi Foundation developed it in the United Kingdom to promote the teaching of basic computer science in schools and developing countries.

Previously, in 1981, Acorn had worked with the British Broadcasting Corporation to make a low-cost computer available in the United Kingdom for students, but that hardware was out-of-date. The group that resulted in the Raspberry Pi, wanted to create a new computer and also market it under the BBC Micro name, but Acorn own the rights to that name through 2011.[1] So, the project picked a different name, Raspberry Pi.

In 2006, early concepts of the Raspberry Pi were based on the Atmel ATmega644 microcontroller, which had publicly available schematics.[2] Foundation trustee Eben Upton assembled a group of teachers and computer enthusiasts to devise a new computer to inspire a new generation of students.[3] Pi's model A, model B and model B+ are references to the original models of the British educational BBC Micro computer, developed by Acorn Computers.[4] The first model was released in February 2012. In May 2014, the three millionth Pi shipped.[5]

The Foundation provides Raspbian, a Debian-based linux distribution for download, as well as third party Ubuntu, Windows 10 IOT Core, RISC OS, and specialised media center distributions.[6] It promotes Python and Scratch as the main programming language, with support for many other languages.[7]

The board contains USB and HDMI ports that will allow connection to keyboard and monitors. Raspberry Pi also sells a camera and expansion boards.