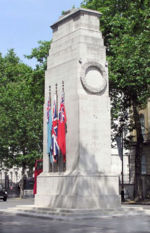 In the Commonwealth, Remembrance Day is the annual commemoration of those who died during war, especially World War I and World War II (although those who died in more recent conflicts, such as Afghanistan and Iraq are also honored). Remembrance Day is observed on 11 November with 2 minutes silence being held at 11:00 am. The date is the anniversary of Armistice Day, which marked the cessation of hostilities in 1918 with the signing of the Germany's surrender to end The Great War, which was the former name of World War I prior to the second global conflict.

The main commemoration occurs at the Cenotaph in London, England, and is marked by the laying of wreaths of poppies by the military, political leaders and members of the British Royal Family. Both current and former members of the armed forces, as well as representatives of civil organizations march past the monument to pay their respect. In the two weeks before Remembrance Day, members of the public wear an artificial poppy as a symbol of their respect and gratitude to those who gave their lives for today's freedom.