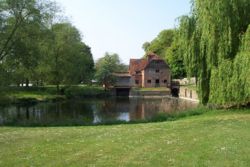 The Thames in Oxfordshire The Thames in central London

The River Thames is, at 215 miles (346 km) from source to sea, the longest river that runs wholly in England (the Severn, which rises in Wales, is longer).[1] It rises near Cricklade in Gloucestershire and runs through Oxford, Reading, Windsor and London before entering the North Sea. The river is tidal as far as Teddington Lock, in west London. A number of canals were built in the eighteenth and nineteenth centuries connecting the Thames to the inland waterways system; most notable are the Kennett & Avon Canal, connecting the Thames to Bristol and the west coast, and the Grand Junction Canal (since 1929 the Grand Union Canal) which runs from London to Northamptonshire and links London to the canal system of the Midlands and northern England.

London's location was determined by the presence of a safe crossing-point of the river, and the role of the Thames as a gateway for trade enabled the capital to grow and to become Britain's largest port. Extensive docks were excavated along the Thames to the east of London in the eighteenth and nineteenth centuries. The river also served as a highway for trade until the development of railways in the nineteenth century.

The River Thames also has strong associations with the English, later British, Royal Family. Many significant royal homes are or were situated by the river, and monarchs would travel between them by lavishly-decorated barges. These include (west to east) Windsor Castle (still a royal residence), Hampton Court Palace, Richmond Palace, Kew Palace, Whitehall Palace (the Palace of Westminster), the Tower of London, and Greenwich. Runnymede, where King John signed the Magna Carta is believed to be either a meadow beside the Thames or an island in the river.

Commercial river traffic is now largely confined to container traffic using the extensive docks at Tilbury in Essex; the docks in London have been filled in or are used for leisure and housing. Leisure craft form the majority of the boats that ply the river (but this was true a century or more ago: see, for example, the works of Jerome K. Jerome). The Thames plays host to the annual Oxford and Cambridge boat race, in which a team of eights from each University compete to row the course in the shortest time period.

The Thames is home to a wide variety of wildlife including, most famously, a large number of swans. All unmarked mute swans on the Thames belong to the monarch and a swan census, known as the Swan Upping, is held every year to determine their numbers.

Jonathan Schneer, The Thames: England's River (London 2005) is a readable account that attempts to describe the significance of the Thames in English history.