Ferdinando Sacco and Bartolomeo Vanzetti were two revolutionary terrorists who were convicted and executed in 1927 for a 1920 double murder carried out during a robbery. The duo became a Communist[1] cause célèbre.[2] For decades, liberals argued that they had been wrongly convicted, their leading champion Harvard Law School Professor Felix Frankfurter,[3] a future Supreme Court Justice. One of Frankfurter's students, future State Department official Noel Field, would later write, "The shock of the Sacco-Vanzetti executions drove me leftward": he would become a Soviet intelligence source;[4] another of Frankfurter's students, Alger Hiss, would later emulate Sacco and Vanzetti, to whom would reportedly compare himself.

The case became fodder for polemical works: Socialist[5] playwright Maxwell Anderson had his greatest success with the 1935 play Winterset, a tragedy in verse loosely based on the case, which won him the Critics’ Circle Award. In the play, the accused is innocent, and the judge is described as "crazy as a bedbug." Socialist novelist Upton Sinclair likewise wrote a novel, Boston, based upon the case, in which he suggested that the convicted terrorists had been railroaded.[6] But in 2005, a 1929 letter from Sinclair surfaced, in which he confided that the well-known socialist Fred Moore, radical attorney for the terrorist[7] Industrial Workers of the World[8] who represented Sacco and Vanzetti, told Sinclair that “the men were guilty," and confessed "in every detail how he had framed a set of alibis for them."[9] As he revealed in another letter, from 1927, Sinclair feared for his life if he told the truth: "My wife is absolutely certain that if I tell what I believe, I will be called a traitor to the movement and may not live to finish the book."[10] In the end, Sinclair decided that there was more money in lying than telling the truth: "It is much better copy as a naive defense of Sacco and Vanzetti because this is what all my foreign readers expect, and they are 90% of my public."[11] Even the Communist[12] Roger Baldwin, founder of the American Civil Liberties Union (ACLU) ("The Civil Liberties Union has been connected with the Sacco and Vanzetti matter, but has hidden its participation under various false fronts," boasted Baldwin. "We are at present instigating a nation-wide movement," etc.)[13] admitted that "there was no possible doubt of the guilt of Sacco and Vanzetti."[14]

At the trial, seven eyewitnesses placed Sacco at the scene of the crime. Four decades later, a 1961 ballistics test by the Massachusetts Police Lab, employing new technology not available at the time of the trial, provided strong evidence that Sacco did indeed fire the fatal bullet that day.[15] Nevertheless, in 1977, Massachusetts Democratic governor Michael Dukakis signed a resolution pardoning Sacco and Vanzetti, apologizing to them and establishing a day in honor of them.

The case was finally closed in 1983 when still more advanced ballistics tests by the renowned forensic scientist Dr. Henry Lee, Director and Chief Criminalist of the Connecticut State Forensic Laboratory; Anthony L. Paul, Police Firearms Unit Laboratory Manager and Senior Firearms Examiner, Philadelphia Police Department; and Marshall K. Robinson, Senior Firearms Examiner for the Bridgeport, Connecticut, Police Department (under the auspices of the Select Committee on Sacco and Vanzetti), demonstrated conclusively that six cartridges taken from Sacco when he was arrested were made on the same machine that made the two fired cartridge cases recovered from the crime scene.[16] 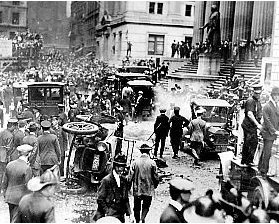 Wall Street bombing, 1920, attributed to Galleanists. World-Telegram photo. Source: Federal Bureau of Investigation
The pair were members of a terrorist[17] group known as the Galleanists,[18] which was responsible for the May Day 1919 attempted bombing of a number of public figures.[19] They had dodged the draft for World War I.

Liberals alleged that they had been tried for their beliefs rather than their actions, and questions about the fairness of such a trial in Boston were raised from the beginning. They had skilled defense counsel in a famous labor attorney, but no Italians were included in the jury (none may have been in the jury pool). The defense counsel eliminated every businessman from the jury. Witnesses for the prosecution were weak, with one testifying that the murderer spoke good English (the defendants did not). The prosecution identified only one bullet as being from Sacco's gun, with no explanation as to the source of the other three bullets found at the scene. The stolen money was never found.

The defendants took the witness stand in their defense, but were subjected to relentless questioning about their political beliefs. Defense counsel repeatedly objected to such questions, but the judge overruled the objections and allowed them. There is widespread agreement that the judge never should have permitted so much questioning about political beliefs at the trial.

The jury returned a guilty verdict after more than a day of deliberations. (At an earlier trial, a different jury had convicted them of a similar crime.) Faced with international protests against the prosecution, the Massachusetts governor appointed a commission to examine the trial and evidence. Throughout the 1920s the case was a flashpoint for protests. Finally, after the commission announced it agreed with the verdict, Sacco and Vanzetti were executed in 1927.

Vanzetti, who sported a distinctive handlebar mustache, maintained his innocence to the end. His final words to the judge before execution were these: "I would not wish to [a dog or snake] what I have had to suffer for things that I am not guilty of. But my conviction is that I have suffered for things that I am guilty of. I am suffering because I am a radical and indeed I am a radical; I have suffered because I was an Italian, and indeed I am an Italian; I have suffered more for my family and for my beloved than for myself; but I am so convinced to be right that if you could execute me two times, and if I could be reborn two other times, I would live again to do what I have done already."

On the left, sympathy has continued for Sacco and Vanzetti ever since. Much is made of a confession by another death row inmate to having perpetrated the crime. But the judge found that unreliable.

Most scholars are convinced of the guilt of Sacco and Vanzetti.