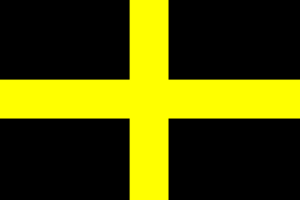 Flag of Saint David
Saint David (Welsh: Dewi Sant) is the patron saint of Wales; his feast day is celebrated on 1 March.

David was born around AD 500 (the precise date is unknown) and died in AD 589, the son of a regional king or sub-king, and educated by St Paulinus of Wales. He achieved renown as a teacher and founded monastic settlements in Wales, Cornwall and Brittany. The communities he founded practiced asceticism: monks, not animals, pulled the ploughs on the fields they cultivated; personal possessions were forbidden; they could only drink water; meat-eating was not allowed. David's symbol - the leek (which is also a symbol of Wales) - is a reflection of this simplicity.

The monastery founded by David at Glyn Rhoslyn on the coast of Pembrokeshire, and where he was buried after his death on 1 March 589, took the name St Davids; it is still the site of a cathedral and claims to be the smallest city in the United Kingdom