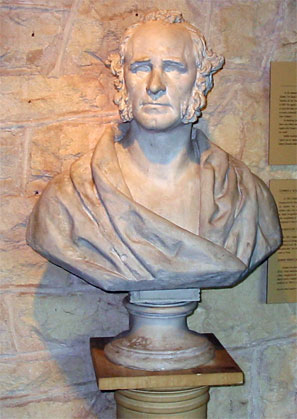 Sam Houston remains one of the colorful and controversial members of Texas history. From his help with Texas independence to his record-breaking political career, Houston was definitely a great and important man.

Houston was born on March 2, 1793 in Rockbridge County Virginia. He was one of nine children and moved to Maryville, Tennessee in 1807 after the death of this father. In 1809 he ran away from home and lived with a Cherokee tribe on Hiwassee Island where he was given the name Colleneh or “The Raven”.

Houston was briefly a schoolteacher in 1812 before joining the US Army in 1813 to fight in the War of 1812. During an assault that was ordered by future president Andrew Jackson Houston was injured by a shot that hit his arm and shoulder. Houston and Jackson developed a close friendship that would last for many years. Houston continued to rise in ranks of the military before leaving the army in 1818.

Houston then opened a legal practice in Lebanon, Tennessee, where he then became the attorney general of the Nashville district before the end of 1818 and also a commander in the state militia. In 1822 he was elected to the House of Representatives for Tennessee, where he strongly supported fellow Tennessean Andrew Jackson. He was congressman from 1823-1827. He won reelection in 1825, but refused to run in 1827, where instead he ran for governor of Tennessee and won. Houston resigned in 1828 after a marriage to a woman named Eliza Allen that ended very quickly.

Houston traveled to the Cherokee nation where he lived amongst the Indians once more, and set up a trading post there. His second marriage to a Cherokee woman ended unsuccessfully as well, and Houston’s friendship with Jackson was crippled, when Jackson learned of Houston’s abandonment of his wife and his government job.

On a business trip to Washington D.C., New York Congressman William Stanbery of Ohio made hurtful accusations about Houston, and used them to attack President Jackson on the floor of Congress. When he refused to answer Houston’s letters, Houston was infuriated, and then tracked him down and beat him with a hickory cane. Houston was arrested and hired Francis Scott Key as his lawyer. They lost in a high-profile case, but thanks to Houston’s highly placed friends, including James Polk, he was only slightly reprimanded. However, Stanbery filed charges against Houston in civil court, where the judge found him liable and ordered Houston to pay a $500 fine. Houston never paid the fine, and fled to Texas instead.

Houston was immediately swept up by Mexican politics and attended the Convention of 1833 as a delegate to Nacogdoches. He also attended the Consultation of 1835 where he was named Major General of the Texas army, and later Commander-in-Chief. Soon after the Texas Declaration of Independence was signed, Houston and his men snuck up on the Mexican army, and quickly took them over during the Battle of San Jacinto. Texas was now free.

Houston was the Texas president from 1836-1838 and again from 1840-1844 (The current Constitution did not allow consecutive terms and in between he was once again a state representative). Houston ran for Texas governor twice, once unsuccessfully in 1857, and again successfully in 1859 as a Unionist. Houston warned against joining the Confederacy and was evicted from his governorship when he refused to pledge support to the Confederacy in 1861. He retired to Huntsville, Texas where he died after a few months due to pneumonia.

Sam Houston is the only person to have served as governor for two states. His numerous offices included governor, president, attorney general, senator, house representative, and state delegate.