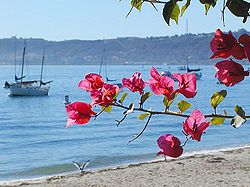 San Diego's bay
San Diego is a city in southern California near the Mexican border. Known for generally moderate climate year round and being near the ocean, it is a generally Republican-leaning city with high housing prices, a growing traffic problem, and little mass transit. San Diego is a city that is heavily into the arts. Tourism, high technology, education, and a strong Navy presence dominate the economy. It is known worldwide for the San Diego Zoo, one of the tops in the world.

Spurred by members of the San Diego Chamber of Commerce, the city actively lobbied the Navy and the federal government to make San Diego a major location for naval, marine, and air bases. Its 'culture of accommodation' determined the way the city would grow and created a military-urban complex rather than a tourist and health resort. With the reduction in naval spending after 1990, the Chamber turned to tourism and conventions.[1]

The Chinese settled in San Diego beginning in the 1870s and found work in the fishing industry, railroad construction, service industry, general construction work, food industry, and merchandising. They were forced into a Chinatown but otherwise received less violent attention than suffered by Chinese elsewhere in the West.

The late-20th century San Diego Chinese community is made up of a heterogeneous population that includes Cantonese-speaking, Mandarin-speaking, and Hokkien-speaking members, as well as those from a variety of places of origin, including Southeast Asia. Many in the San Diego community have joined together to determine and further their Chinese-American identity.[2]

Its only professional team is the San Diego Padres (Baseball).