San Marino is a tiny European country. Entirely surrounded by Italy, it is the oldest republic in the world. It is also the third smallest country in Europe. It was founded in 301 AD by a Saint Marinus, a Christian who was seeking religious freedom from the Roman Empire.

The population of San Marino is comprised of native Sammarinese[1] and Italian citizens. Crop farming, sheep farming, and the working of stone from the quarries formed the early backbone of San Marino's economy. It has no mineral resources, and today most of the land is cultivated or covered by woods.

The Arengo, initially formed with the heads of each family, relinquished its power to the Great and General Council. In 1243, the first two Captains Regent were nominated by the Council, and this method of nomination is still in use today. The Council is composed of 60 members who are elected every 5 years under a proportional representation system in all nine administrative districts. These districts (Townships) correspond to the old parishes of the Republic, and each one is ruled by a Council, which is chaired by a Captain elected every 5 years. The Great and General Council approves the budget, as well as the nominations of Captains Regent and heads of the Executive. Every 6 months, the Council elects two Captains Regent to be the heads of state. The Regents are chosen from opposing parties so they can keep an eye on each other. They serve a 6-month term. The investiture of the Captains Regent takes place on April 1 and October 1 in every year. Once this term is over, citizens have 3 days in which to file complaints about the previous Regents' activities. If they warrant it, judicial proceedings against the former head(s) of state can be initiated.

The Great and General Council elects the Council of Twelve for the duration of the Legislature and serves a jurisdictional body that also acts as a third instance Court of Appeals. Two government inspectors represent the State in financial and patrimonial questions.

The Legislative body consists of the Great and General Council, the parliament, and a unicameral Chamber. The members of parliament are usually elected every five years and are in charge of legislation, justice, and the administration of jurisdiction. In addition, they are tasked with electing the Captains Regent, the State Congress, the Council of Twelve, the Advising Commission, and the Government Unions once the Council nominates them. Parliament also has the power to ratify contracts with other countries. The parliament is divided into five different Advising Commissions consisting of 15 councils which examine, propose, and discuss the implementation of new laws that are on being submitted to the Great and General Council.

The judiciary is composed of the commissioner of the law, the judging magistrate, the appellate judge, the juvenile court, and the judge of last appeal. The commissioner tries civil and penal cases with penalties not exceeding a three-year sentence. The judging magistrates, who are appointed by parliament for a three-year term and can be indefinitely reappointed, preside over all other cases.

Reform legislation, enacted in 2004, no longer requires that the country's lower court judges be noncitizens; however, most lower court judges remained Italian citizens. A local conciliation judge handles cases of minor importance. Under the same reform, the final court of review is the judge of the last appeal. In civil matters, this judge confirms or overrules either the lower court judgment or an appellate decision; in criminal matters, he judges on the legitimacy of detention measures and on the enforcement of a judgment.

On April 28, 2005 a new act established the country's constitutional court with the following functions: 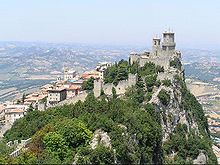 San Marino is a multi-party democratic republic. The two main parties are the Christian Democratic Party of San Marino (PDCS), and the Party of Socialists and Democrats (PSD), in addition to several other smaller parties. Due to the small size and low population of San Marino, it is difficult for any party to gain a pure majority, and most of the time the government is run by a coalition. Following the June 2006 election results, the PSD formed a center-left coalition government with the Popular Alliance and the United Left parties. After a government crisis in the fall of 2007, the four members of the Democrats of the Center also joined the ruling coalition.

Because tourism accounts for more than 50% of the economic sector, the government relies not only on taxes and customs for revenue but also the sale of coins and postage stamps to collectors throughout the world. In addition, the Italian Government pays San Marino an annual budget subsidy provided under the terms of the Basic Treaty with Italy. In recent years banking has also become an important economic activity.

Harmonization of statutes and policies with the EU is a major domestic and foreign policy priority of the republic. Another priority issue is the signing of a cooperation agreement with Italy, San Marino's most important economic partner.

San Marino is an active player in the international community. Currently, the Republic has diplomatic relations with over 70 countries. Italy is the only country represented by an ambassador resident in San Marino. The Papal Nuncio, based in Rome, is the dean of San Marino's diplomatic corps. Traditional economic activities in San Marino were food crops, sheep farming, and stone quarrying. Today farming activities focus on grain, vines, and orchards, as well as animal husbandry (cattle and swine). Besides the tourism industry, San Marino makes most of its income from the banking industry and from the manufacture and export of ceramics, tiles, furniture, clothing, paints, fabrics, and spirits/wines. The per capita level of output and standard of living in San Marino are comparable to those of Italy. In addition, San Marino maintains the lowest unemployment rate in Europe and no national debt.

According to tradition, San Marino was founded in AD 301 when a Christian stonemason named Marinus the Dalmatian fled to the island of Arbe to escape the anti-Christian Roman Emperor Diocletian. Marinus hid on the peak of Mount Titano and founded a small community of people following their Christian beliefs. It is certain that the area had been inhabited since prehistoric times, although evidence of existence on Mount Titano only dates back to the Middle Ages. In memory of the stonecutter, the land was renamed "Land of San Marino" and was finally changed to its present-day name, "Republic of San Marino."

The original government structure was composed of a self-governed assembly known as the Arengo, which consisted of the heads of each family. In 1243, the positions of Captains Regent (Capitani Reggenti) were established to be the joint heads of state.

The land area of San Marino consisted only of Mount Titano until 1463, at which time the republic entered into an alliance against Sigismondo Pandolfo Malatesta, Lord of Rimini, who was later defeated. As a result, Pope Pius II Piccolomini gave San Marino the towns of Fiorentino, Montegiardino, and Serravalle. Later that year, the town of Faetano joined the republic on its own accord. Since then, the size of San Marino has remained unchanged.

San Marino has been occupied by foreign militaries twice in its history, both for only short periods of time. In 1503, Cesare Borgia, known as Valentino, occupied the republic until his death several months later. In 1739, Cardinal Alberoni used military force to occupy the country. Civil disobedience was used to protest his occupation, and clandestine notes sent to the Pope to obtain justice were answered by the Pope's recognition of San Marino's rights and restoration of San Marino's independence.

In 1993, its national soccer team scored the fastest ever goal in World Cup competition, against England, after eight seconds of play, though they then lost the match by 1 goal to 7.