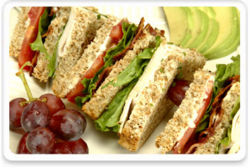 A sandwich in the strictest sense is the name given to a popular food item consisting of one or more fillings (such as meat, cheese, or vegetables) placed between two slices of bread[1]. The beauty of the sandwich is that it is not only portable - it can be taken and consumed anywhere, from the table to the car to the work place - but the possibilities for fillings are almost endless, with the bread keeping the mess contained.

Bread is among mankind's oldest prepared foods, and doubtless it was combined with meats, stews, or other foods among many peoples and cultures worldwide, including as a means of containing and holding the other items. It is known that the pita - a type of bread with origins in the Middle East - had then as now an ability to form a pocket when baked, which would be filled with meat, vegetables, and sauces to suit the consumer. In pre-Columbian Mexico the tortilla was the staple bread, and often wrapped around other added ingredients.

The historian Edward Gibbon, best known for his monumental Decline and Fall of the Roman Empire, kept a journal of his life, and wrote down the oldest written reference to food described as a sandwich during a gentlemen's social club for the evening of November 24, 1762:

"I dined at the Cocoa Tree with Holt... that respectable body, of which I have the honor of being a member, affords every evening a sight truly English. Twenty or thirty, perhaps, of the first men in the kingdom, in point of fashion and fortune, supping at little tables covered with a napkin, in the middle of a coffee-room, upon a bit of cold meat, or a sandwich, and drinking a glass of punch."[2]

At roughly the same time, a French writer named Pierre-Jean Grosley toured Britain and recorded daily life in his Londres[3] (English title: A Tour to London). Grosley also described a sandwich, and elected to clearly state that it was named for someone:

"A minister of state passed four and twenty hours at a public gaming-table, so absorpt in play, that, during the whole time, he had no subsistence but a piece of beef, between two slices of toasted bread, which he eat without ever quitting the game. This new dish grew highly in vogue, during my residence in London; it was called by the name of the minister who invented it."[4]

The "minister of state" Grosley referred to as the sandwich's namesake was John Montagu, a aristocratic British national, First Lord of the Admiralty, the sponsor of Captain James Cook on his voyages of exploration, and the 4th Earl of Sandwich[5]. As described above, Montagu was supposedly a very passionate card player who, according to the legend, ate while playing the game. Rather than get his cards greasy, Montagu had ordered slices of salted beef placed between two slices of bread; his fellow players noticed, of which they in turn requested "to have the same as Sandwich",[6]. Later biographers would reject the gambling legend; Montague was known to be a workaholic, and it was much more likely that he had the sandwich ingredients brought to his desk and assembled in order not to interrupt his work[7].

Sandwiches are mentioned in the English literature from about 1762 onward, initially as a snack at nightly men's societies. In the 19th century the sandwich became a popular intermediate meal, especially during tea. Moreover, it was in any case a typical English picnic and was considered the best food for rail travel, and still often offered on trains and on airplanes today. In the late 19th century it appeared cut and quartered in social gatherings and private clubs as small snack items; Italian immigrants would bring with them the concept that it was the perfect "working man's lunch" due to its size and portability, an idea which would quickly catch on and spread. And during the 20th century, the sandwich would spread world-wide and be sold by the billions, under such names as Subway, McDonald's, White Castle, Geno's, and many others.