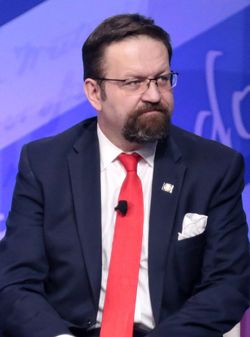 Sebastian Gorka (born October 22, 1970) is a conservative foreign policy and terrorism expert. He served as a member of the national security advisory staff and as a deputy assistant to U.S. President Donald Trump in his administration, and he served as a national security editor at Breitbart News Network prior to that. Gorka is Hungarian, was born in the United Kingdom, and is a naturalized American citizen. He also served as an advisor to conservative Hungarian Prime Minister Viktor Orbán.

Liberals have unsuccessfully and without evidence tried to paint Gorka as a "racist," "Nazi," or "anti-Semite,"[5][6][7][8] and failing that, they have attempted to attack his credentials as a counterterrorism expert.[8]

Despite his conservative positions, Gorka has occasionally taken more liberal positions on certain issues, such as supporting military intervention in Syria purely for moralistic reasons, using emotionalistic arguments, and doing so regardless of the financial cost and interests of the U.S.[9]