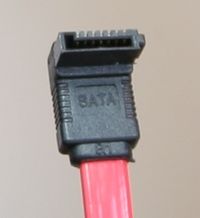 Serial ATA (Serial Advanced Technology Attachment) is the current standard of computer connection used to attach data storage devices such as hard drives or Solid-state drives to the motherboard. Technically, it is referred to as "a bus interface between host bus [adapters] and mass storage devices."[1] It has almost completely replaced IDE connections (Integrated Drive Electronics), also known as Parallel ATA.

Serial ATA/150 (SATA 1.0) was released in late 2002. This offers a net transfer speed of 1.5 Gbit/s, as the name suggests. Later, Serial ATA/300 (SATA 2.0) was released, which doubled the transfer speed. As with the previous, the speed is in the title—it has a net transfer speed of 3 Gbit/s. After this came SATA/600 (SATA 3.0), which again doubled the speed, allowing for a communication rate of 6 Gbit/s. However, most SATA links use what is called 8b/10b signaling, which means that to send 8 bits of the desired information, 10 bits must be sent. The result of this is that SATA 3.0, for example, can only achieve a net transfer of 600 MB/s (rather than the 750 MB/s true speed). Another small benefit is that Serial ATA cables are narrower than the older Parallel ATA ribbon cables. This means that SATA cables do not restrict air flow as much as their predecessor.[2]

The Serial ATA International Organization (SATA-IO) tracks improvements and reports on them, while working to maintain an industry standard of SATA technology which will be versatile and reliable. With each new SATA version that is released, SATA-IO releases a review explaining differences, such as this review on SATA 3.3.

The SATA communication system uses more power that PATA systems. This is especially a concern if it is used in a laptop or other portable device.[2]