George 'Sonny' Perdue (born December 20, 1946) serves as the United States Secretary of Agriculture under President Donald Trump. Previously, he served as Georgia's 81st Governor from January 13, 2003 until January 10, 2011. Governor Perdue immediately went to work reforming the state budget, setting priorities, and cutting wasteful spending. His efforts helped stimulate the economy and turn the state budget deficit that he inherited into a substantial surplus. The Governor then invested in his top priorities and got results. During Perdue's first term, Georgia created over 200,000 new jobs and posted the highest graduation rate and SAT scores in state history. After a first term marked by numerous accomplishments, Governor Perdue won re-election by an overwhelming margin in November 2006.

As Georgia's Governor, Perdue has led the state based on his life experiences prior to entering public service. Sonny was born on December 20, 1946, in Perry, Georgia, to a lifelong farmer and a classroom teacher. He graduated from Warner Robins High School and earned a doctorate in veterinary medicine in 1971 from the University of Georgia. Following his service as a Captain in the United States Air Force, Perdue became a successful small business owner, concentrating in agribusiness and transportation. Today, those businesses have grown to include several locations across the Southeast. 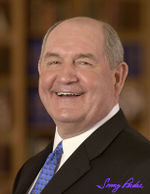 Perdue was a respected leader in his church and his community when he decided to enter public service. After serving on the Houston County Planning and Zoning Board during the 1980s, he ran for the Georgia State Senate in 1990 and won. Sonny spent the next 11 years representing his Middle Georgia district in the General Assembly. Perdue left the State Senate in 2001 to begin his successful campaign for Governor, which focused on restoring public trust in state government and empowering all Georgians.

For all of his success in business and public service, Governor Perdue is proudest to serve as a devoted husband, loving father, and grandfather. Sonny is married to the former Mary Ruff of Atlanta, Georgia. The couple has four children and six grandchildren. Additionally, Sonny and Mary have served as foster parents for eight newborns awaiting adoption. The Perdue's attend the First Baptist Church of Woodstock, where they have taught a Sunday school class for young couples emphasizing the importance of faith in building a strong and lasting marriage. [1]