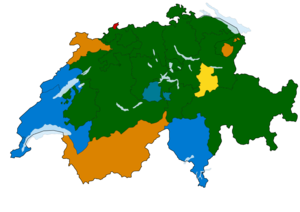 Results of the 2015 Swiss federal election in October 2015. Each canton is shaded according to the party that won the most votes for the National Council (lower house). The SVP is shaded in dark green, and it won the largest popular victory for a Swiss political party in at least a century.[1]

For other political parties with this name, see People's Party (disambiguation).

The Swiss People's Party or Democratic Union of the Centre (German: Schweizerische Volkspartei - SVP, French: Union Démocratique du Centre - UDC, Italian: Unione Democratica di Centro - UDC, Romansch: Partida Populara Svizra - PPS) is a political party in Switzerland that was founded in 1971 by the merger of the Farmers, Artisans, and Citizens’ Party—generally known as the Agrarian Party—with the Democratic Party. It has pursued conservative social and economic policies, including lower taxes and reduced spending, as well as the protection of Swiss agriculture and industry. The party has also opposed Swiss membership in international bodies such as the United Nations, which Switzerland did not join until 2002.

Under the de facto leadership of strong conservative businessman Christoph Blocher,[2] the SVP became the largest party in Switzerland. Over the course of several recent elections, it has continually grown in power and (as of 2016) holds the most parliamentary seats of any party at the federal level. Its policies emphasize free market economics, low taxes, neutrality regarding foreign affairs, a tough stance on crime and a reduction of unwanted immigration. The party has enjoyed repeated success in mobilizing popular majorities for referenda and popular initiatives, often managing to set the political agenda against strong opposition from establishment elites.

The SVP's history can be traced back to several farmers parties "in agrarian cantons of Protestant, German-speaking Switzerland" in the late 1910s.[3] These parties were first represented in the Federal Council in 1929, and these parties were united under one "'umbrella organization'" in 1936 at the creation of the Farmers, Artisians and Citizens Party (BGB).[4] The BGB was a generally conservative party,[5] but after the Second World War it participated in the postwar consensus politics of Switzerland.[6]

In 1971, the BGB merged with two cantonal Democratic Parties, and the same year the name was changed to the Swiss People's Party (SVP).[7] The two Democratic Parties were politically centrist and socially liberal, so the merger shifted the SVP as a whole towards the political center, even though there were internal ideological debates.[8] The merger was intended to increase the SVP's voting base, but it did not increase its electoral performance, remaining around 11 percent.[7]

Shift to the right and rise of Christoph Blocher In 1977, Christoph Blocher, a 36-year-old businessman, was elected president of the Zürich branch of the SVP.[9] Under the leadership of Blocher, a strong conservative, the Zürich SVP broke from the rest of the party[9] and adopted a bold right-wing conservative agenda.[10] In the 1979 elections, the Zürich SVP increased their share of the vote from 11.3 to 14.5 percent, the best result in 50 years.[10]

In the 1980s and 1990s, there was a divide between the moderate Bern wing and the new Conservative right-wing Zürich wing.[11] However, mostly in the 1990s, the conservative faction took control of the national party.[12] During the same period, the SVP grew dramatically in size, making large increases in its budget and expanding its representation and reach to all 26 cantons.[13]

Arguably the most important action of the SVP was its successful opposition of Swiss entry into the European Economic Area (EEA) in 1992. As a strong conservative, Blocher strongly opposed Swiss integration with, and thus a loss of sovereignty to, outside powers, and he was able to convince the national party to adopt his position.[14] The SVP was one of only two major parties to oppose membership, the other being the leftist Greens.[15] The referendum to join the EEA failed, a major success for Blocher and the SVP, and a majority of SVP members voted with Blocher, strengthening his position in the party.[14] The vote has been considered "a turning point" for the SVP and Swiss politics in general.[16] Since then, opposition to European integration and loss of national sovereignty has been "a main issue" for the SVP, and in the coming years it sponsored several other conservative national initiatives, which usually were not successful.[17]

The SVP and its predecessors had "showed remarkable stability" in "electoral support" until the 1990s.[18] However, the SVP grew dramatically in size, becoming the largest party by 1999 with 22.5 percent of the vote.[19] The SVP continued to increase in the 2003 and 2007 elections.[20][21] The SVP absorbed voters from both smaller right-wing parties and larger conservative-in-name-only parties such as the CVP and the FDP.[22]

Electoral performance of the SVP in cantonal districts in the 2011 federal election.

After the 2003 election, after the SVP received 26.7 percent of the popular vote, by then clearly the largest party in the nation.[20] It received a second seat on the Federal Council with Christoph Blocher holding that seat.[23] He was not re-elected in 2007[23] and was replaced by Eveline Widmer-Schlumpf. Schlumpf and her colliege, Samuel Schmid, were politically moderate and were expelled by the party soon afterward,[24] forming the Conservative Democratic Party (BDP).[23] Despite its name, it is not a real conservative party and supports socially liberal policies, as well as Swiss integration into the EU. Due to scandals, Schmid resigned and was replaced by conservative SVP-member Ueli Maurer in 2009,[25] and in 2015, the SVP regained its second seat after Schlumpf resigned due to a poor election result for her party and a record election result for the SVP.[26]

The SVP received 29.4 percent of the vote in the 2015 federal election and 65 seats in the 200-seat National Council, a record amount for the party.[1] No Swiss political party had exceeded the SVP's share of the vote in at least a century, and no party received more seats in the National Council since 1963, when the number of seats was established at 200.[1] In the same election, leftist parties lost a large number of seats.[1][27]

Political positions of the major Swiss political parties as of 2007.

The SVP is a national conservative party.[29] The SVP supports small government, the free market, Swiss sovereignty, and it opposes the encroachment of Swiss independence, mass immigration, homosexual "marriage", and the welfare state.[29][30] It supports Euroskeptic policies.

Successful referendums that the SVP has sponsored include a 2009 initiative to ban the construction of any new minarets,[31] a 2010 initiative to expel foreigners who commit crimes,[32] and a 2014 initiative to limit immigration by instituting quotas on it.[33] It must be noted, however, that when implementing the 2010[34] and 2014[35] referendums, the Swiss government did not institute a strict implementation but diverged from the referendum and the intentions of the SVP.

The SVP successfully opposed the 1992 referendum proposing EEA membership for Switzerland, despite the fact that the vast majority of parties supported membership.[15]

In 2018, the party unsuccessfully pushed to change the Swiss constitution to explicitly prioritize Swiss law over globalist international law wen the two contradict.[36][37]