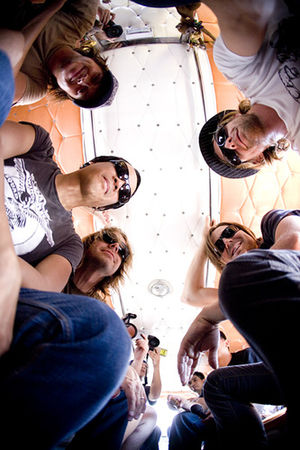 Switchfoot on a Jeepney

Switchfoot is an American alternative rock band that originated from San Diego, California. The five piece band is made up of: Jon Foreman (vocals/guitar), Tim Foreman(bass/vocals), Drew Shirley(guitar), Jerome Fontamillas(keyboard/bgv/piano/guitar), and Chad Butler(drums). Switchfoot is a critically acclaimed Christian rock band that has toured over the entire world. They are known for their energetic as well as spiritual performances. The band won a Grammy Award for Best Rock Gospel Album in 2011, for their 7th album, "Hello Hurricane".[1]

Switchfoot began as small band in 1996 and were known as Chin Up. The band’s singer and guitarist was Jon Foreman, the bassist was Tim Foreman, and the drummer was Chad Butler. After performing at local shows, they were contacted by Charlie Peacock, the owner of the indie record label, Re:think Records. Soon after, Chin Up signed to Re:think Records under the current band name, Switchfoot. Quickly the band released three albums, The Legend of Chin, New Way to Be Human, and Learning to Breathe. Out of the three, Learning to Breathe became the most popular, becoming certified gold, and later received a Grammy nomination for best rock gospel album. Also, the song “Only Hope” from their first album was featured in the movie A Walk to Remember. The song became recognized across the country and helped them sign to a new record label known as Columbia Records/SonyBMG.

After touring for two years, the band announced that they were going back to the studio to record a new album. Along with this, the band announced they had a new guitarist, Drew Shirley, who had worked with them on tour as an additional guitarist. Nothing Is Sound was released on September 13, 2005. With additional guitars from Shirley, Nothing Is Sound became a guitar driven record with a darker and harder sound than Switchfoot’s previously released albums. Nothing Is Sound debuted at #3 on the Billboard 200 albums chart and contained the hit singles “Stars” and “We Are One Tonight.” However, the original release of the CD was tainted because it contained Sony’s “Extended Copy Protection,” a malicious program that installed itself on one’s computer when played. But soon, the CDs were recalled and new CDs were releases without the questionable software.

Soon after, Switchfoot was once again in the studio, recording their new album, Oh! Gravity. The album entered the Billboard chart at #18 and peaked at #1 on iTunes’s top album chart. This album brought Switchfoot back to their lo-fi, indie rock roots and sounded more like their first album. Oh! Gravity touched on the topics of living, time, death of a loved one, but focused primarily on materialism. This album included the singles “Dirty Second Hands,” “Oh! Gravity,” and “Awakening.” A year after the release of Oh! Gravity, Switchfoot announced on August 10, 2007 that they would be leaving Columbia Records so they could release music as an individual band. Jon Foreman said that there were no hard feelings between the two and they enjoyed the time with Columbia Records. Later, the band opened up their own record label under the name of lowercase people records.

After Switchfoot announced their new record label, they started to build their own studio in their hometown, San Diego, California. It was completed in spring, 2008 and soon after, Switchfoot started to record new songs. The first song to be recorded at the new studio was “This Is Home,” for the movie The Chronicles of Narnia: Prince Caspian. Switchfoot's 7th album, entitled "Hello Hurricane" was released in 2009. This was followed by Vice Verses, released in 2011. Today, Switchfoot is touring the United States and continuing to make their music known.

Switchfoot is also part of many organizations and charities worldwide. Some of these organizations are Habitat for Humanity, To Write Love On Her Arms, Invisible Children, DATA, and the One Campaign. Switchfoot has also started their own organization known as “lowercase people,” drawing attention to social issues worldwide. In addition, lowercase people has a quarterly online magazine that features notable artists of all type. Art featured in this online magazine is usually sold in lowercase people’s online store as shirts, prints, stickers, and other accessories. The profit made from the merchandise is put into the lowercase people’s Justice Fund, which helps aid third-world communities. One example of lowercase people’s activity is their involvement with a small children’s choir in Africa called Kuyasa Kids. The members of the choir are orphaned children who are infected with AIDS. In 2004, lowercase people helped the Kuyasa Kids release a CD which would help the kids obtain an education.

Switchfoot is also very much involved with their fans. They have formed their own fan club, known as Friends of the Foot, and have released several videos of themselves on the road as a podcast. As a member of the fan club, one also gets special treatment. This includes early entry and a time of to a meet and greet with the band at headlining concerts, discounts off merchandise, and special updates on the band. Switchfoot also involved the fans while recording their album Oh! Gravity by setting up a webcam in the studio. They even held a contest to see who would play a cowbell for one of the songs being recorded.