Not sure if this is just how IE is viewing it, but the wikitable on the right overlaps text in the first section making it hard to read. Jrssr5 12:39, 4 April 2007 (EDT)

considering this is supposed to be more "americanized" than wikipedia, does it bother anyone that this article is longer than alberto gonzales's, or speaker pelosi's? just a thought...TheisonMarsh

Not at all. An article this long, about one of the most famous of Roman emperors, is entirely appropriate.--TerryHTalk 23:21, 8 April 2007 (EDT)

This pic, from Jacques, needs to be added. Thanks for adding upping it, Jacques! Could an admin unlock this article, please? It was only locked while it was on the front page.-AmesGyo! 23:52, 11 April 2007 (EDT) 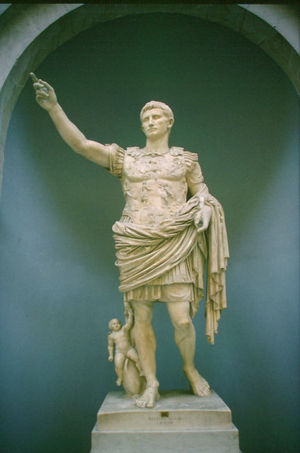 The statue of Augustus Caesar, Augustus of Prima Porta,