A tax revolt is a popular protest against high or unfair taxes.

High taxes and a very unfair and inefficient collection system were one cause of the French Revolution in 1789.

Sumerian City Lagash instigated history's first recorded Tax revolt. This came after Lagash's rulers had increased local taxes and restricted personal freedoms. The people of Lagash resented this enough that they overthrew their King. They brought to power a god-fearing ruler named Urukagina, who eliminated excessive taxation and rid the city of usurers, thieves and murderers—the first known reform. Time frame is stated for Urukagina (reigned ca. 2380 BC–2360 BC) However the dating process is in doubt as is all dating systems for ancient world.

In 1765 the colonists protested vigorously against the Stamp Act, a small but illegal tax levied by the British Parliament on legal paperwork. 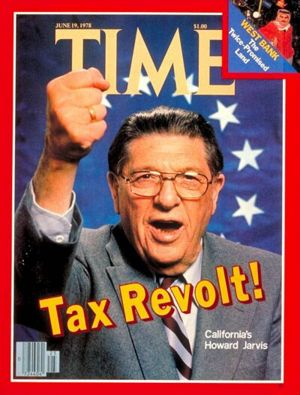 The colonists said that Parliament had no right to levy taxes, because the colonists were not represented. "No taxation without representation" became the cry. Americans successfully boycotted merchants and Britain repealed the tax. It was the start of a chain of anti-tax protests leading to the American Revolution. British anger at the tax revolt that dumped taxed tea into Boston harbor—the "Boston tea Party"—speeded the route to revolution.

From the 1880s to the 1910s, conservative Democrats, led by Grover Cleveland and the Bourbon Democrats protested the high tariffs that speeded up industrialization, claiming it taxed the ordinary citizen too much. In 1914 the Wisconsin Progressives under Robert LaFollette were defeated in state elections because the conservative Republicans complained of high taxes.

During the Great Depression, prices, profits and incomes fell, but taxes went up. Local taxpayers in many cities, most notably Chicago, withheld taxes.[1] In 1932 Republican President Herbert Hoover raised taxes, making the depression worse. President Franklin D. Roosevelt tried to not raise taxes, but he did add the new Social Security tax in 1937. Other taxes were tried but repealed. Meanwhile, most state governments in the 1930s added a new tax—the sales tax on purchases.

In the 1970s a grass roots political movement led by Howard Jarvis protested fast-rising property taxes in California. They passes a statewide initiative in 1978, Proposition 13, still in effect, which capped property taxes.

In 1981 and 1985 President Ronald Reagan successfully lowered federal taxes. His crusades became a model for the Republican Party for the next quarter-century.