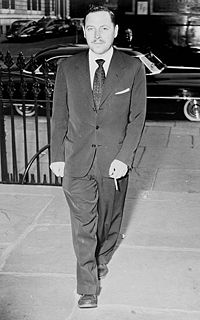 Tennessee Williams (1911-1983) was a liberal American playwright whose works are often taught in high school. He is perhaps best known for two works: The Glass Menagerie and A Streetcar Named Desire, both of which drew from his life experiences for inspiration.

Tennessee (born Thomas Lanier) Williams was born and raised in Columbus, Mississippi.[1] He was admitted to the University of Missouri in 1929. It was there that he saw a performance of Ghosts by Henrik Ibsen and subsequently decided he wanted to become a playwright.[2] He was able to have two of his early plays produced in 1937, and the following year, he moved to New Orleans and changed his name to Tennessee. In 1944, he debuted The Glass Menagerie in Chicago, which, after a successful run, made its way to Broadway. The play helped to establish him as an important American voice in theater. The year 1947 saw him debut perhaps his most famous play, A Streetcar Named Desire, which would go on to win a Pulitzer Prize, the first of two he would win in his career (the other one being for his 1955 play Cat on a Hot Tin Roof). Williams died of a combination of drug-abuse and alcoholism.

Williams was a homosexual who had various relationships with adults but was a secret pederast. He traveled widely in Europe and Mexico, undoubtedly used prostitutes, and from time to time would proposition teenage boys . In his Memoirs published in 1975, he offered advice on sex with “hustlers”, recommending that 'penetration be avoided' as 'they are most probably all infected with clap in the ass'. This puts him in the forefront of modern sex-educators. He also once said that he found public displays of “gay lib ... so vulgar they defeat their purpose”.

Williams’ friend the writer Edward Albee (a homosexual himself) revealed that Williams was a pederast. A critic writes, “Williams's scandalous desire for boys was naturally kept outside of the official written texts (newspapers, interviews, and biographies) of Williams's era. Though it was kept out of the official record, it was apparently no secret that Tennessee Williams enjoyed the company of underage male companions. Robert Wallace remarks that "Tennessee Williams's attraction to adolescent boys,[was] a 'compulsion' reputed to have contributed to his despair and demise" (Wallace 22). Additionally, Albee, who visited with Williams towards the end of his life, comments on the issue: "He came out to Montauk several times and took a room, a couple of rooms in a place up beyond the town. And he usually brought some pretty boy -- usually some nice young kid -- unfortunately, he would beat up on him. Tennessee was something of a sadist, but he would swim in my pool, for hours at a time. He loved swimming" (Crespy 219).

Williams' play “Suddenly Last Summer” features a young American poet Sebastian Venables, who takes a seaside holiday somewhere in the Mediterranean - well-known playground for pederasts - where he is murdered by a pack of starving street-boys. After he has had some dealings with them, the naked boys from the beach pursue him to his hotel and shout ugly names at him - suggesting perversion. Finally they devour him. The horror story conveys Williams’ mixed feelings of temptation and guilt as he encountered the available street-boys in Mexico, Europe or even in New Orleans. Williams is said to have gone on holidays with Gore Vidal, both looking for boys, but unlike Vidal, Williams was at least aware of the exploitative side of what he was doing, as a rich foreigner taking advantage of those who were homeless and hungry. [3]

Tennessee Williams is generally recognized as one of the greatest American playwrights, of his or any other time.[4] His plays are performed regularly in theaters across North America to this day.

Williams was very prolific and left behind a significant body of work, including: