From Conservapedia
Jump to: navigation, search
Theobald Wolfe Tone (June 20, 1763 - November 19, 1798) was a leader of the United Irishmen movement, and is regarded as having initiated Irish republicanism. Tone committed suicide in jail after being sentenced to death following the Irish rebellion of 1798. 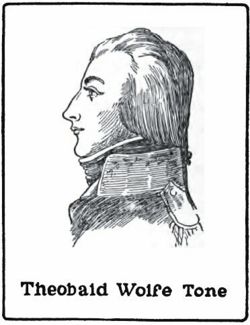 Tone was born in Dublin and studied law at Trinity College. In the early 1790s, there was much enthusiasm for republicanism, spurred by the French Revolution. Among the key principles was the dis-establishment of religious discrimination. While some supported political reform within the context of maintaining the link with England, Tone and others sought to establish an independent Irish republic. In September 1791, Tone wrote The Northern Whig, an essay emphasizing these differences.

In October 1791, Tone and several others founded the Society of the United Irishmen. Unlike Tone, most of the Society's members initially sought political reform; however, most eventually came to believe that this was unattainable by peaceful means and supported armed rebellion.

In 1794, the United Irishmen concluded that seeking military assistance from France offered the best hope for the political change they sought, and began to negotiate with the French committee of public safety. The British discovered the existence of the negotiations, and arrested a number of United Irishmen. As Tone had not been directly involved in the negotiations, the government allowed him to emigrate to the United States in 1795, with the agreement that he would no longer conspire against them. On Belfast's Cave Hill prior to his departure, Tone and two other United Irishmen, Thomas Russell and Henry Joy McCracken, made a famous vow to "never desist in our efforts until we subvert the authority of England over our country and assert our independence." Despite his agreement with the British, Tone traveled to Paris in February 1796 to seek a French invasion of Ireland. He was commissioned as an Adjutant-General in the French army.

In December 1796, an expedition of 14,000 men, including Tone, sailed from France under Louis Hoche. However, the fleet was unable to land due to high winds, and after several days of waiting offshore returned to France. Ultimately rebellion broke out in Ireland in 1798, and Tone sought to persuade Napoleon Bonaparte to launch a new expedition to support it. Napoleon was unenthusiastic, and merely send a number of small raiding parties. One such party including Tone, surrendered to the British in October 1798.

Tone was recognized and court-martialed in November. He was found guilty and sentenced to death by hanging, despite his request to be shot. Before the sentence could be carried out, Tone killed himself by slitting his throat.