Thomas Kinkade (1958 - 2012) was an American artist who had enjoyed fabulous commercial success. His most famous paintings depict imaginary English countryside scenes, with thatched cottages and a warm glow of light coming from the windows.

Kinkade called himself "Painter of Light," a phrase which he registered as a trademark. The phrase has a double meaning. It refers to his characteristic use of chiaroscuro to convey the impression that the street lamps and windows in his paintings are actually glowing. In fact, the lighting in many of his galleries is designed to give the impression that sunsets are glowing and windows brightly lit when the lights are turned up, and that that the painting depicts a scene at night when the lights are turned down. This optical illusion is quite striking. But it also refers to his identity as a Christian. According to his website, "Kinkade uses his gift as a vehicle to communicate and spread inherent life-affirming values."

Most of the products sold by Kinkade's galleries are hybrids, consisting of mass-produced prints which are "highlighted;" that is, touched up with actual paint in key areas, by teams of artists working under Kinkade's direction. In "master edition" prints, the most costly, some of the highlighting is said to be done personally by Kinkade himself. Kinkade has won numerous awards including many artist of the year awards of National Association of Limited Edition Dealers (NALED). Thomas Kinkade was a self-described "devout Christian". He said that his art is not just art -- it's a powerful force.

Some of his art critics say:

"I think the reason you probably aren't going to find his work in many museums, if any, is that there really wasn't anything very innovative about what he was doing...," said Michael Darling, chief curator of Chicago's Museum of Contemporary Art. "I really think that he didn't bring anything new to art." [1]

Kinkade had a fan base that was unprecedented, and he made collectors out of the many people who brought his art into their homes. Ibidem

Kinkade's sentimental paintings — with their scenes of cottages, country gardens and churches in dewy morning light — were beloved by many in middle-class America but generally dismissed by the art establishment. The paintings typically depict tranquil scenes with lush landscaping and streams running nearby. Many contain images from Bible passages. [2] 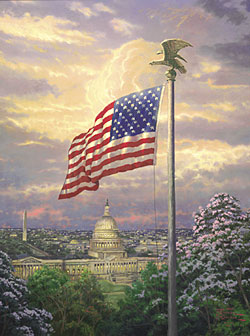