From Conservapedia
(Redirected from Trade deficit)
Jump to: navigation, search 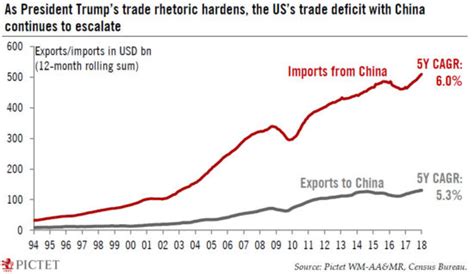 After a period of 70 years of being a creditor nation, the USA has became a debtor nation in 1985.[3] Some reputable economists of the 2010s disagree on whether the USA trade deficit is a debt that ever has to be paid off.[4][5][6][7]

If the USA continues on as it is, then in some distant decade, the USA will no longer be able to pay the interest on the money it owes to China. That is called "unserviceable debt". The debt then grows exponentially and the situation becomes ever more hopeless. China will then simply offer a treaty with easy-to-understand terms. The treaty will say: "We will completely forgive the debt if the USA simply cedes the State of Washington" or some such. Homeowners in that State will be given ample time to abandon their property and leave and the treaty will take effect. Any Americans remaining will simply lose their birthright; their USA citizenship and become Chinese citizens under Chinese law in that new province of China. Even a very dumb person can use their God-given foresight and see that this analysis of the situation is correct. Fellow citizens: Buy American![8][9][10][11][12][13][14][15][16]