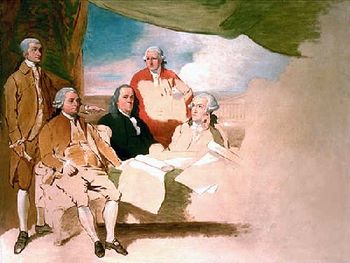 The American Revolution (1775–83) was actually a world conflict, involving not only the United States and Britain but also France, Spain, and the Netherlands. The peace process brought a vaguely formed, newly born United States into the arena of international diplomacy, playing against the largest, most sophisticated, and most established powers on earth.

The surrender of the main British army at at Yorktown in October 1781 caused a change in the British government. Prime Minister Lord North and the Tory party were ousted, and the Whigs, under Rockingham, assumed power. This new government opened negotiations with the American commissioners in Paris.

The American had eight main goals, four of which were considered to be essential to any peace settlement, and the other four to be favorable additions. The four essential terms included:

The optional terms included Britain ceding all of Canada to the United States, British payment for damage caused by British military action, a formal apology by Parliament admitting that Britain was wrong to have caused the war, and allowing American ships and merchants to have the same rights and privileges of commerce as their British counterparts within the British Empire.

By November 1782, the British and American commissioners had reached agreement and signed preliminary terms of peace. However, under the terms of the Franco-American alliance, this peace treaty could not go into effect until Britain and France reach agreement. In turn, France had an additional alliance with Spain, so no Anglo-French treaty could go into effect until Britain and Spain also reach agreement. Unfortunately, Spain's nominal contribution to the war was counterbalanced by the most ambitious territorial demand - the return of Gilbralter by Great Britain.

The French proposed that Gilbralter be returned to Spain, that Great Britain be compensated by awarding her several French islands in the Caribbean, and that Spain cede control of Santa Domingo to France. The war-weary British expressed interest in this plan.

In September 1782, Spain had mounted an expedition, attempting to retake Gilbralter. Negotiations were frozen as all eyes turned expectantly to view the result. It was a humiliating failure, which, together with the French naval defeat in the Caribbean, reinvigorated the British and hardened their negotiating position. Spain and France were now forced to be more accommodating at the negotiating table.

The British put forth a proposal in which they would retain Gilbralter, but Spain would be bought off by awarding her East and West Florida. The Spanish were also reluctant to accept the Mississippi River as the western border of the United States, having their own claims to the territory between the Mississippi and the Appalachian Mountains (Spain had gained control of Louisiana after the Seven Years War). France, on the verge of bankruptcy, pressured Spain to accept this settlement and thus end the war.

Finally, on January 20, 1783, an armistice was declared. A change of British government and minor modifications to the French and Spanish treaties, as well as Anglo-Dutch negotiations, delayed the final ratification of the Treaty of Paris until September 3, but on that day the War for American Independence officially concluded.

The three American negotiators, John Adams, Benjamin Franklin, and John Jay, proved themselves to be masters of the game, outmaneuvering their counterparts and clinging fiercely to the points of national interest that guaranteed a future for the United States. Two crucial provisions of the treaty were British recognition of U.S. independence and the delineation of boundaries that would allow for American western expansion.

The treaty is named for the city in which it was negotiated and signed. The last page bears the signatures of David Hartley, who represented Great Britain, and the three American negotiators, who signed their names in alphabetical order.

Many treaty documents, however, can be considered as originals. In this case, for example, the United States and British representatives signed at least three originals, two of which are in the holdings of the National Archives. On one of the signed originals the signatures and wax seals are arranged horizontally; on the other they are arranged vertically. In addition, handwritten certified copies were made for the use of Congress. Some online transcriptions of the treaty omit Delaware from the list of former colonies, but the original text does list Delaware.

Text of the Treaty

In the name of the most holy and undivided Trinity.

His Brittanic Majesty acknowledges the said United States, viz., New Hampshire, Massachusetts Bay, Rhode Island and Providence Plantations, Connecticut, New York, New Jersey, Pennsylvania, Delaware, Maryland, Virginia, North Carolina, South Carolina and Georgia, to be free sovereign and independent states, that he treats with them as such, and for himself, his heirs, and successors, relinquishes all claims to the government, propriety, and territorial rights of the same and every part thereof.

It is agreed that the people of the United States shall continue to enjoy unmolested the right to take fish of every kind on the Grand Bank and on all the other banks of Newfoundland, also in the Gulf of Saint Lawrence and at all other places in the sea, where the inhabitants of both countries used at any time heretofore to fish. And also that the inhabitants of the United States shall have liberty to take fish of every kind on such part of the coast of Newfoundland as British fishermen shall use, (but not to dry or cure the same on that island) and also on the coasts, bays and creeks of all other of his Brittanic Majesty's dominions in America; and that the American fishermen shall have liberty to dry and cure fish in any of the unsettled bays, harbors, and creeks of Nova Scotia, Magdalen Islands, and Labrador, so long as the same shall remain unsettled, but so soon as the same or either of them shall be settled, it shall not be lawful for the said fishermen to dry or cure fish at such settlement without a previous agreement for that purpose with the inhabitants, proprietors, or possessors of the ground.

It is agreed that creditors on either side shall meet with no lawful impediment to the recovery of the full value in sterling money of all bona fide debts heretofore contracted.

It is agreed that Congress shall earnestly recommend it to the legislatures of the respective states to provide for the restitution of all estates, rights, and properties, which have been confiscated belonging to real British subjects; and also of the estates, rights, and properties of persons resident in districts in the possession on his Majesty's arms and who have not borne arms against the said United States. And that persons of any other description shall have free liberty to go to any part or parts of any of the thirteen United States and therein to remain twelve months unmolested in their endeavors to obtain the restitution of such of their estates, rights, and properties as may have been confiscated; and that Congress shall also earnestly recommend to the several states a reconsideration and revision of all acts or laws regarding the premises, so as to render the said laws or acts perfectly consistent not only with justice and equity but with that spirit of conciliation which on the return of the blessings of peace should universally prevail. And that Congress shall also earnestly recommend to the several states that the estates, rights, and properties, of such last mentioned persons shall be restored to them, they refunding to any persons who may be now in possession the bona fide price (where any has been given) which such persons may have paid on purchasing any of the said lands, rights, or properties since the confiscation.

And it is agreed that all persons who have any interest in confiscated lands, either by debts, marriage settlements, or otherwise, shall meet with no lawful impediment in the prosecution of their just rights.

That there shall be no future confiscations made nor any prosecutions commenced against any person or persons for, or by reason of, the part which he or they may have taken in the present war, and that no person shall on that account suffer any future loss or damage, either in his person, liberty, or property; and that those who may be in confinement on such charges at the time of the ratification of the treaty in America shall be immediately set at liberty, and the prosecutions so commenced be discontinued.

There shall be a firm and perpetual peace between his Brittanic Majesty and the said states, and between the subjects of the one and the citizens of the other, wherefore all hostilities both by sea and land shall from henceforth cease. All prisoners on both sides shall be set at liberty, and his Brittanic Majesty shall with all convenient speed, and without causing any destruction, or carrying away any Negroes or other property of the American inhabitants, withdraw all his armies, garrisons, and fleets from the said United States, and from every post, place, and harbor within the same; leaving in all fortifications, the American artillery that may be therein; and shall also order and cause all archives, records, deeds, and papers belonging to any of the said states, or their citizens, which in the course of the war may have fallen into the hands of his officers, to be forthwith restored and delivered to the proper states and persons to whom they belong.

The navigation of the river Mississippi, from its source to the ocean, shall forever remain free and open to the subjects of Great Britain and the citizens of the United States.

In case it should so happen that any place or territory belonging to Great Britain or to the United States should have been conquered by the arms of either from the other before the arrival of the said Provisional Articles in America, it is agreed that the same shall be restored without difficulty and without requiring any compensation.

The solemn ratifications of the present treaty expedited in good and due form shall be exchanged between the contracting parties in the space of six months or sooner, if possible, to be computed from the day of the signatures of the present treaty. In witness whereof we the undersigned, their ministers plenipotentiary, have in their name and in virtue of our full powers, signed with our hands the present definitive treaty and caused the seals of our arms to be affixed thereto.

Done at Paris, this third day of September in the year of our Lord, one thousand seven hundred and eighty-three.