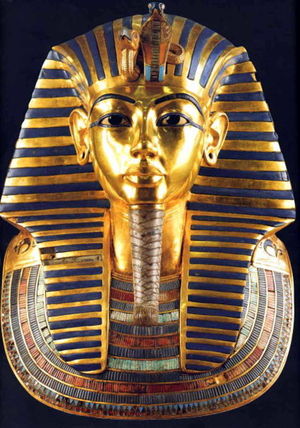 The funeral mask of Tutankhamun
Tutankhamun, or King Tut, was a pharaoh of Egypt's Eighteenth Dynasty who reigned from 1336-1327 B.C. Although he died at 19 and had few accomplishments to boast of, he is Egypt's best-known pharaoh. This is because his spectacular tomb was discovered intact.

There has been much controversy concerning Tut's lineage. He was most likely a son of Smenkhkare, his immediate predecessor as pharaoh. Smenkhkare was a brother of Akhenaten who ruled briefly in 1336 BC and may have been assassinated.[1] Akhenaten, the "heretic pharaoh," replaced Egypt's traditional polytheism with the monotheistic cult of Aten. Tutankhamun restored polytheism and the primacy of the cult of Amun.

Tut's mother and father were bother and sister.[2] He was only 10 or 11 when he ascended the throne.[1] He married Ankhesenamun, a daughter of Akhenaten and Nefertiti. The royal couple were thus first cousins on both the paternal and maternal sides. Genetic testing showed that Tut had two children by mummy KV21A, presumably Ankhesenamun.[2] They were both girls and were both still born.[3] Tut named army commander Horemheb as his successor. However, Horemheb was away on campaign when Tut died unexpectedly. Tut was 19 years old when he died.[1][2] Ay, Tut's vizier, succeeded him as pharaoh.

It was once thought that the fracture in the king's skull was the result of a chariot accident. It is now believed that the skull was damaged by mishandling after death.[4] A 2010 forensic study gave the cause of death as "avascular bone necrosis in conjunction with the malarial infection."[2]

In the Nineteenth Dynasty (c. 1292 to 1187 BC) and later, Akhenaten, Smenkhkare, Tut, and Ay were all treated as illegitimate rulers, tainted by Aten worship. Their names are omitted from the Abydos king list and an effort was made to remove all mention of them in records and on monuments. In nineteenth century, the history of this period was reconstructed by archeologists.

Tut's tomb was discovered intact by Howard Carter in 1922, still filled with gold and virtually untouched by looters. In 2010, genetic testing established that mummy KV55, discovered in 1907, is Tut's father, and that mummy KV35YL ("the Younger Lady"), discovered in 1898, is his mother. The large wound on the left side of the Younger Lady's face was made while she was still alive, so it appears that she was murdered.[2] If Smenkhkare and his wife were assassinated together, that could explain why his reign was so short.