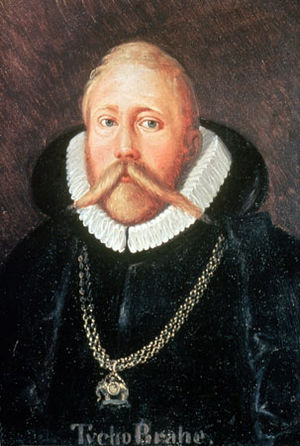 Tycho Brahe (Dec 14, 1546 in Knudstrup - Oct 24, 1601 in Benátky near Prague) was a Danish astronomer who did the most precise measurements prior to the invention of the telescope. In 1572, he observed a super nova. He became court astronomer of the emperor Rudolf II in 1599. Here, in Prague, Johannes Kepler was his assistant. Brahe's astronomical observations permitted Kepler to derive his Laws of Planetary Motion.

Tycho's model of the Universe

Tycho Brahe proposed a model that was a hybrid of geocentrism and heliocentrism: in his system, the Moon and the Sun revolved around a fixed Earth, while all other planets (Mercury, Venus, Mars, Jupiter and Saturn) revolved around the Sun. Mathematically, this model is identical to a heliocentric model,[1] with the advantage of avoiding the paradoxes of a moving Earth as perceived in his time (no stellar paralaxes, flying birds couldn't maintain flight if the Earth was moving, etc.).[2] He also did this to hold to the tradition of a still Earth as most in his time believed due to the ancient traditions of Ptolemy and Aristotle.