USS Arizona (BB-39), the third ship of the United States Navy to bear the name, and the first to honor Arizona after statehood, was a battleship best known for her tragic loss at Pearl Harbor on December 7, 1941.

Arizona, a 31,400 ton Pennsylvania-class battleship built at the New York Navy Yard, Brooklyn, New York, was commissioned in October, 1916. After shakedown cruise off the east coast and in the Caribbean, she operated out of Norfolk, Virginia, until November 1918, when she made a brief cruise to France. She made a second cruise to European waters in April–June 1919, proceeding as far east as Turkey. During much of 1920-21, the battleship was in the western Atlantic and Caribbean areas, but paid two visits to Peru in 1921 in her first excursions into the Pacific. From August 1921 until 1929, Arizona was based in Southern California, making occasional cruises to the Caribbean or Hawaii during major U.S. Fleet exercises.

In 1929-31, Arizona was modernized at the Norfolk Navy Yard, Portsmouth, Virginia, emerging with a radically altered appearance and major improvements to her armament and protection; this included replacing her "cage" masts with sturdier tripods. In March 1931, she transported President Herbert Hoover and his party to Puerto Rico and the Virgin Islands. In August of that year, Arizona returned to the Pacific, continuing her operations with the fleet during the next decade. From 1940, she, and the other Pacific Fleet battleships, were based at Pearl Harbor on the orders of President Franklin D. Roosevelt.

Arizona’s last fleet problem was XXI. At its conclusion, the United States Fleet was retained in Hawaiian waters, based at Pearl Harbor. She operated in the Hawaiian Operating Area until late that summer, when she returned to Long Beach on 30 September 1940. She was then overhauled at the Puget Sound Navy Yard, Bremerton, Wash., into the following year. Her last flag change-of-command occurred on January 23, 1941, when Rear Admiral Isaac C. Kidd relieved Rear Admiral Willson as Commander, Battleship Division 1.

The battleship returned to Pearl Harbor on February 3, 1941 to resume the intensive training maintained by the Pacific Fleet. She made one last visit to the west coast, clearing “Pearl” on June 11, 1941 for Long Beach, ultimately returning to her Hawaiian base on July 8. Over the next five months, she continued exercises and battle problems of various kinds on type training and tactical exercises in the Hawaiian operating area. She underwent a brief overhaul at the Pearl Harbor Navy Yard commencing on October 27, 1941, receiving the foundation for a search radar atop her foremast. She conducted her last training in company with her division mates Nevada (BB-36) and Oklahoma (BB-37), conducting a night firing exercise on the night of December 4, 1941. All three ships moored at quays ("keys") along Ford Island on the 5th, with Arizona mooring at berth F-7.

Scheduled to receive a tender availability, Arizona took the repair ship Vestal (AR-l) alongside her port side on Saturday, December 6. The two ships thus lay moored together on the morning of December 7; among the men on board Arizona that morning were Rear Admiral Issac Kidd and the battleship’s captain, Captain Franklin van Valkenburgh, and Lt.Col. Daniel R. Fox, USMC, the division marine officer. 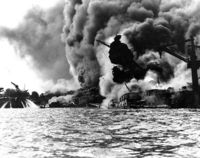 Shortly before 0800, Japanese aircraft from six fleet carriers struck the Pacific Fleet as it lay in port at Pearl Harbor, and in the ensuing two attack waves, wreaked devastation on the Battle Line and on air and military facilities defending Pearl Harbor.

On board Arizona, the ship’s air raid alarm went off about 0755, and the ship went to general quarters soon thereafter. Insofar as it could be determined soon after the attack, the ship sustained eight bomb hits. The one that most likely caused the ship’s destruction came from the 800-kilogram bomb dropped by the Nakajima B5N2 Type 97 carrier attack plane commanded by Lt. Comdr. Kasumi Tadashi, of the carrier Hiryu’s air unit, that glanced off the face plate of Turret II and penetrated the deck to explode in the black powder magazine, which in turn set off adjacent smokeless powder magazines. A cataclysmic explosion ripped through the forward part of the ship, touching off fierce fires that burned for two days; debris showered down on Ford Island in the vicinity.

Acts of heroism on the part of Arizona’s officers and men, sailors and marines, were many, headed by those of Lt. Comdr. Samuel G. Fuqua, the ship’s first lieutenant and senior surviving officer on board, whose coolness in attempting to quell the fires and get survivors off the ship earned him the Medal of Honor. Fuqua’s “calmness,” Sgt. John M. Baker, USMC, a survivor of the battleship’s marine detachment, later recounted, “gave me courage, and I looked around to see if I could help.” Posthumous awards of the Medal of Honor also went to Rear Admiral Kidd, the first flag officer to be killed in the Pacific war, and to Capt. Van Valkenburgh, who reached the bridge and was attempting to fight his ship when the bomb hit on the magazines destroyed her.

The blast that destroyed Arizona and sank her at her berth alongside of Ford Island consumed the lives of 1,177 of the 1,512 men on board at the time—over half of the casualties suffered by the entire fleet on the “Day of Infamy.”

Placed “in ordinary” at Pearl Harbor on 29 December 1941, Arizona was struck from the Naval Vessel Register on December 1, 1942. Her wreck was cut down so that very little of the superstructure lay above water; her after main battery turrets and guns were removed to be emplaced as coast defense guns. Arizona’s wreck remains at Pearl Harbor, a memorial to the men of her crew lost that December morn in 1941. On 7 March 1950, Admiral Arthur W. Radford, Commander in Chief of the Pacific Fleet, instituted the raising of colors over Arizona’s remains, and legislation during the administrations of Presidents Dwight D. Eisenhower and John F. Kennedy designated the wreck a national shrine. A memorial was built spanning the ship; it was dedicated on 30 May 1962.

Arizona was awarded one battle star for her service in World War II. Twenty-three ships (destroyers, destroyer escorts and high speed transports) were named in honor of men from Arizona’s ship’s company who perished that morning.