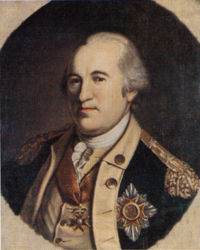 Friedrich Von Steuben was a Prussian captain and an American general who was a founding father of the modern U.S. Army. He was the first Inspector General of American Revolutionary Army, and wrote its first manuals of tactics, military discipline and formal drills. He converted a rag-tag group of revolutionary fighters into a modern, well disciplined efficient and ferocious army [1], [2].

Baron von Steuben was born in Magdeburg, Prussia. He was a son of a Prussian officer. He spent his early childhood in the Russian Empire since his father was assigned to serve in the Russian Army by Prussian king Frederic Wilhelm I. At the age of 10 von Steuben and his father returned to Prussia. Von Steuben became Prussian officer at the age of 17 [3]. In the course of his military service he became a member of the Prussian General Command Staff. This position gave him a unique opportunity to become an expert in issues related to military discipline and organization of the army [4].

After reaching the rank of captain, 33 year old von Steuben was discharged from the Prussian Army (in 1763). Reasons why he left the army remain to this day enigmatic [5]. Even though shortly after his discharge he received a title of Baron, von Steuben’s next few years of life were characterized as quite misfortunate [6]. He was a career military officer, and clearly he had a hard time making a living in the civilian life. Discouraged by his failures he took a life changing decision to enlist his services with the Continental Army of America [7]. He was able to gather the necessary funds to travel to America and offered his services to American revolutionary forces as an unpaid voluntary officer [8]. He was accepted and with his hard work the modern American Army was born [9]. In 1781 von Steuben sat on the court-martial of the British Army officer Major John André, who was charged with espionage. In the same year he took part as a Major General, in the siege of Yorktown. He became an American citizen in 1783.

After the war he was finally compensated for his service to the young American Nation. He was given a land grant and a handsome pension. Von Steuben died in 1794. To this day his contributions to American military is cited by military manuals and prized by the military historians [1], [2], [10].

Significance of Baron von Steuben for US Armed Forces

In 1775 a new country on the American continent was striving for independence and its very existence. The founding fathers of a brand new nation have encountered the problem of not only establishing a new form of government but also of organizing an army able to defend it. This was especially difficult task since the new country was already engaged in war [1]. From the "shot heard around the world" on April 19, 1775 until Valley Forge in 1778, American Continental “army” appeared to be little more than a rag-tag group of unruly civilians. Recognizing this dangerous deficiency General George Washington, through Benjamin Franklin, US Ambassador to France, enlisted an aid of a highly recommended Prussian officer Baron Friedrich von Steuben.

Upon his arrival at Valley Forge on 23 February 1778, von Steuben inspected - what he was told to be - the American Continental Army. To his surprise he was shown a mob consisting of several thousand undisciplined, poorly uniformed, half-starved, and piteously looking men. With a candor typical for a Prussian Staff officer, von Steuben made his first assessment of the military readiness of those soldiers - stating bluntly: "No European army could be kept together in such a state."[1], [11], [12]. He started to work immediately to improve this dismal situation. Immediately, in one night following his dreadful inspection, von Steuben wrote a manual of basic drill movements. The very next day he started to implement those drill instructions in an incremental but steady fashion. First, he selected 120 men and created from them a model company. Then, von Steuben and his aides worked tirelessly day and night instilling a sense of military discipline, order and hierarchy into those crude recruits [13]. Modern American Army Field manual gives the following description of the results of von Steuben’s hard work [1]:

“Discipline became a part of military life for these selected individuals as they learned to respond to command without hesitation. This new discipline instilled in the individual a sense of alertness, urgency, and attention to detail (…). As they mastered the art of drill, they began to work as a team and a sense of pride in themselves and their unit developed. Watching this model company drill, observers were amazed to see how quickly and orderly the troops could be massed and maneuvered into different battle formations.”

After the training of the model company was accomplished its members were distributed throughout the Army as drill teachers. An enormous attention was paid to stringent performance of drill movements. Moreover, an emphasis was put on a strict observance of chain of command, and simplicity and efficiency of military structure [12]. All those elements were modeled rigorously upon battle-tested Prussian military canon [10], [14]. Historians agreed that a new formed American Army was based upon a model far superior to the contemporary armies of such imperial powers as Britain, or France [3], [14], [15], [16]. Ultimately, this superiority along with courage and dedication of all individual soldiers secured numerous future victories of American troops which extended beyond the Revolutionary War. It is one of the most amazing paradoxes of the history - that it was the American Army based upon Prussian military standards - which ultimately defeated the indomitable Army of the Third Reich. It took a Prussian Army style to finally conquer a direct successor of a Prussian military might.

Von Steuben was promoted to Major General and was appointed as first Inspector General of American Armed Forces. Based upon his experience he wrote the first official American field army manual in l779 entitled “The Regulations for the Order and Discipline of the Troops of the United States” [17]. This book is known until this day in the military circles as the "Blue Book” [1].

The drill procedures established at Valley Forge were not changed for over 85 years, and most of these drill terms and procedures are still in effect in today’s U.S. Army.

With the passage of time weaponry and armament became more advanced. The details of drill and discipline had to adapt to novel tactical concepts. Still, their spirit and foundations remains the same. Obviously, von Steuben’s drill procedures which are still taught the U.S. Army are not employed on modern battlefields. However, objectives accomplished by his marvelous drill - teamwork, confidence, pride, alertness, attention to detail, esprit de corps, and discipline - are just as important to modern day U.S. Army as at the times of their creator.

2. Krewson, M.B., Von Steuben and the German contribution to the American Revolution : a selective bibliography. 1987, Washington: Library of Congress. 44 p.