The Washington Monument is an obelisk that stands 555 feet tall in Washington, D.C. dedicated to George Washington. Engraved on its aluminum cap[1] is the Latin phrase "Laus Deo," meaning "Praise be to God." When It was completed it was the world's tallest structure until the Eiffel Tower was finished in 1889.

The chief architect, Robert Mills, was the first Federal Architect of the United States. Not surprisingly he was also a Freemason, as was George Washington himself. The obelisk design of the monument and some of the ceremonies involved with its official dedication are traditional Freemason trademarks. This monument, built in the blade-like shape of an Egyptian obelisk and completed in 1884, is the most prominent structure in the American capital city. Built in honor of the nation’s first president, the marble monument has served as a backdrop for some of the country’s most historic moments, including Martin Luther King, Jr.’s “I Have a Dream” speech. It’s at its most beautiful when mirrored in the Reflecting Pool at sunrise or sunset, and especially on the Fourth of July with evening fireworks bursting overhead.[2]

When the monument was originally built, a Bible was enclosed at the cornerstone.[3] 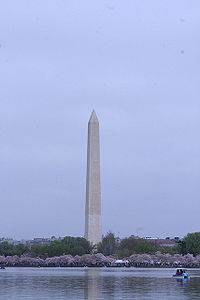