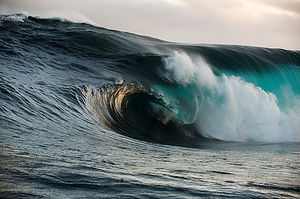 Waves in the ocean are caused by the wind, while the tide is dependent on the moon

In physics, a wave is a method of energy transportation.

Mechanical waves require an environment to travel through - called a medium. The medium's density, elasticity and temperature determine velocity. Matter with the most elasticity, least density and highest temperature would create the fastest wave.[1]

Surface waves are transverse waves and longitudinal waves mixed into one medium.[1]

Electromagnetic waves are waves that do not require a medium.

Matter waves are produced by electrons.

The amplitude of a wave is the height of the displacement.[2]

The velocity of a wave is how quickly the wave travels.

The wavelength (represented by the Greek symbol lambda - λ) is the length of one wave in meters.

and all variations. This includes the formulas: